The Sydney hotelier has cemented his presence in the Newcastle and Central Coast regions with the purchase of the freehold of the Beach Hotel in Merewether.

The Bale and Twohill families sold the famed Newcastle hotel, known colloquially as The Beaches, for the first time in 45 years. The sale campaign was led by Deane Moore of Moore & Moore Real Estate in conjunction with Mike Wheatley of Knight Frank. Although it was a heart-wrenching decision to part with the iconic Merewether Beach Hotel, the matriarch of the family, Joan Bale, said “All good things must come to an end.”

Lazarus said the location of the iconic hotel was a big part of the appeal.

“The potential of The Beaches appealed to me. It’s the only beach-side pub in Newcastle, and people love being waterside.”

Lazurus also owns the nearby Exchange Hotel in Hamilton, and the Shoal Bay Country Club one hour north, at the top of the Central Coast. In Sydney, he owns The Eastern in Bondi Junction, however his focus is now on the Newcastle and Central Coast regions.

“The market in Sydney is just very expensive and very competitive. And now that we have the three hotels in relative vicinity up here in Newcastle and the Central Coast, this is a region I’m more focused on.”

The two-storey Beach Hotel is set on an 1858 sqm block, with views over Merewether Beach. Its offering includes a main bar, bistro, TAB, gaming room with 17 EGMs, and three function areas. It also has a deck on the first floor overlooking the beach, which is an incredibly popular spot with patrons. The hotel was most recently renovated in 2016.

The lie of the land

While many hoteliers buy pubs with pre-conceived ideas on how they will change its offering, Lazarus told Australian Hotelier that he has learnt that it’s best to become familiar with the operations of a venue before embarking on changes.

“To be totally honest, I made that mistake with the Exchange Hotel and paid the price for it. Newcastle is completely different to Sydney, so you can’t employ the same strategies. We’ve now taken the time to understand the market at the Exchange Hotel, and we’ll start a significant renovation at the beginning of next year, with the hopes to be done by July 2020.”

At the Beach Hotel, the hotelier will take the next twelve months to learn how the hotel functions and what its clientele wants before making changes.

“At The Beaches, we’ll take next year to see how it runs and what its locals are after. We might look to lodge a DA or start working with architects and designers towards the end of the year, for renovation works in 2021.”

Director of the Eastern Hotels Group, Peter Lazarus – who played a large role in the $6.5 million renovation of the Shoal Bay Country Club — will take over the day-to-day reins of the Beach Hotel.

“It’s been a thrill to be part of the reinvigoration of Shoal Bay Country Club and develop it into a high-quality beach side venue. The Beaches has so many similar features and it will be an honour to guide such an iconic space into its next chapter,” stated Peter Lazarus.

“We are so thankful to the Bale and the Twohill families for creating the venue that our family is taking over and hope to continue that legacy for many years to come.”

The Eastern Hotels Group will officially take over the operations of the Beach Hotel in March 2020. 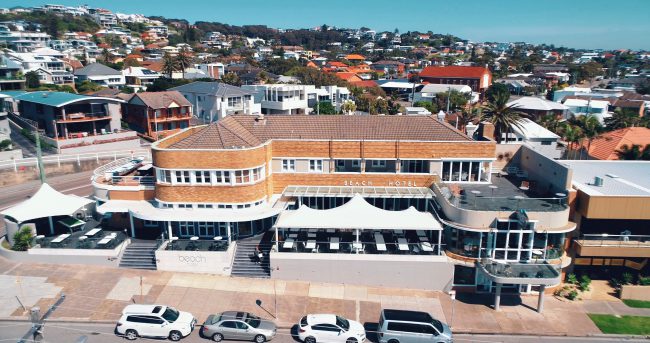 The Beach Hotel, Merewether, is the only beach-side pub in Newcastle.