It’s been a big fortnight for Stephen Hunt and his two hospitality vehicles, with a pub fund purchase of the Kent Hotel, and the sale of the Lakeside Village Tavern.

The SJH Hotel Fund, with Stephen Hunt at the helm as the Fund’s manager, last week purchased the Kent Hotel in Newcastle off Hunt’s family hospitality group for $24.5 million. The funds were raised during a whirlwind investment roadshow that Hunt undertook in September.

Hunt has a long-term history with the hotel, having purchased the pub through his family business, Hunt Hospitality, in 2002. The sale of the hotel to the pub fund will allow for a significant renovation of the hotel, which will take it in a new direction.

“As my fund was getting bigger it was taking up more of my time, so I thought the best solution was to go back to the shareholders with the opportunity and we bought it,” said Hunt.

“The pub is in an ideal location, in a thriving food scene area, but you can never rest on your laurels in any business and it’s important to keep offering patrons something new and fresh.

“I felt the pub was at the end of a cycle and needed to be rejuvenated, so we will start renovations straight away in the gaming room and we are excited to share our vision for opening Newcastle’s first rooftop bar, to create a great new space for people to go.”

The DA for local council is currently being prepared, with the façade of the almost 100-year-old pub to be kept intact, in keeping with its heritage appeal.

Andrew Jolliffe, director of HTL Property, who led the sale campaign alongside Dan Dragicevich, said the sale embodied a new way of thinking in terms of venue financing and operations.

“This sale illustrates a paradigm shift in hospitality investor outlook with sophisticated investment groups now amalgamating both financial and operational resources, in a very deliberate effort to secure strong commercial holdings in gateway locations such as Newcastle.”

On the transaction, Hunt commented: “It’s great to be heading into a new era for the Kent, with many of the same loyal team and customers.”

In other big moves for the SJH Hotel Fund, it has just announced the sale of the Lakeside Village Tavern in Raymond Terrace for $12 million. The Fund had purchased the hotel in 2016 for $7.3 million, creating a considerable return on investment for shareholders.

“Hunt Hospitality is forever assessing the market for both buy and sell-side opportunities and when the approach was made, the pricing and ease of transaction made for a deal we couldn’t refuse. We can now redeploy that equity into our other venues at what we believe will be a superior return than if left in situ at the LVT,” stated Hunt.

The purchasers of the Lakeside Village Tavern are publicans Nicholas Quinn and his Maitland-based syndicate, whose portfolio comprises the Windsor Castle Hotel, Rutherford Hotel, Bradford Hotel and the recently acquired Bank Hotel.

“We have had our eye on the Lakeside for some time so we were very excited to finally get our hands on it. The hotel gives us an opportunity to expand into a different market and embed ourselves into the local community,” stated Quinn.

The Lakeside Village Tavern sits on a 6,068m2 land parcel located adjacent a small village shopping centre. Featuring a bar, bistro, drive-through bottle shop and gaming room with 22 EGMs, it has a weekly revenue of approximately $96,000 ex GST and was ranked 385 in the states gaming ranking in September 2019. The sale process was led by HTL Property’s Dan Dragicevich and Blake Edwards.

The SJH Hotel Fund was established in 2016 and is an open-ended, unlisted and unregistered managed investment scheme structured as a unit trust. It  has an investment portfolio of $39.5million, following the acquisition of the Kent Hotel. It’s other assets are the Duke of Wellington Hotel, New Lambton; and has a 20-year lease for the Sea Breeze Hotel, Nelson Bay. Hunt Hospitality is the operator of the assets. 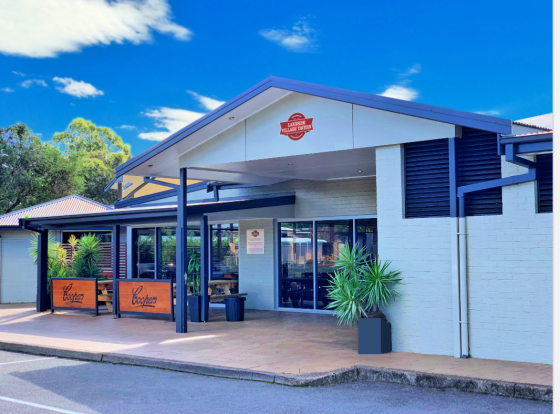