The general manager of the Coopers Hotel in Newtown, Sydney, has been fired for making comments that appeared to condone violence against women on the pub’s Facebook account.

A post on the pub’s Facebook page, uploaded on Wednesday, featured a popular meme of a cartoon where Batman slaps Robin, above which GM Gary Wright had commented, “Keep calm and slap a bitch as we approach the finals of this years NRL! Live & Loud every game!” 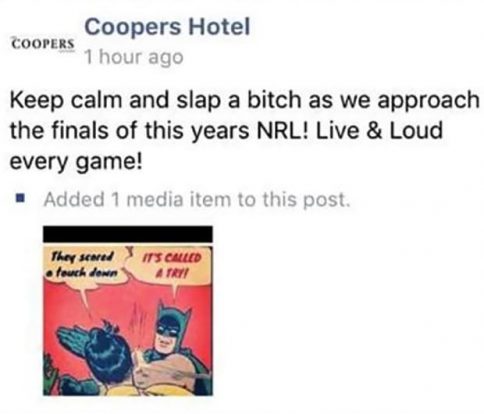 The post immediately attracted a slew of complaints, but instead of apologising for the offensive nature of the post, Wright responded with another an hour later stating “Keep calm and hug like you can’t take a joke as we approach the finals of this years NRL! Live & Loud every game!”

However on Thursday, the licensees of the hotel released a statement via social media saying that Wright’s position had been terminated and that they “do not condone violence of any type against any person, regardless of age, gender or sexual preference.”

We are the licensees of the Cooper's Hotel in Newtown.As some of you may be aware, yesterday a staff member posted a…

The original post has been widely decried by followers of the pub on social media, but many also noted that this is not an isolated incident, with users pointing out a misogynistic tweet from the pub’s Twitter account earlier this month (below).

Since then the pub has been hit with a slew of negative ratings on Facebook, with its average at the time of writing sitting at 2.8 stars out of five.