A new Gold Coast pub has launched with an innovative take on gaming – ping pong and corn hole.

In a sign of the re-emergence of the ‘active pub’, Crafty’s Sports Bar opened at the northern end of the Gold Coast on 14 December with a focus on sports that punters can either play, or watch. They’ve also, unusually, opened in the middle of a designer retail precinct, Harbour Town.

While the local bowlo and beer isn’t exactly a new concept, innovative owners and publicans have identified a significant gap in the market for ‘experiential pubs’ that cost customers the same but offer more.

“There’s a huge movement away from traditional hospitality, the ‘entrée, main, dessert’ experience, and the pub schooner and schnitzel,” says Dave Galvin, Managing Director of Site Hospitality and the man behind Crafty’s Sports Bar. 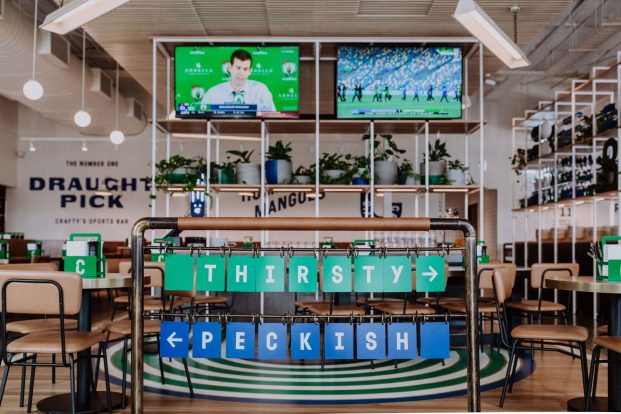 “I did a lot of research around the world and realised that it’s about experience these days. Everyone’s got the same dollar they had five years ago, but they want so much more for it.”

The venue is of course about more than just ping pong and live sport.

“We wanted to create an all-day environment and by doing that we created a modern sports bar that broke down all these stereotypes of being dark and beer-drinking,” says Galvin.

“We wanted to go with something light, bright and engaging. Super family- and female-friendly, where kids can be kids and adults can be adults. The overlay of activities in the space helped position that piece for us. It also helped us use under-utilised spaces – nooks of rooms to create a ping pong arena, corn hole pitches in the laneways. It was really about bringing some life and movement besides traditional drinking and eating into the venue.”

Not only did the team bring a new concept to potential customers, but the unusual retail location has proven an unlikely boon, despite the obvious challenges.

“Our location is an education piece for a lot of people,” says Galvin. “We’ve created something – a modern pub – in the middle of a retail precinct. Shopping centres are becoming the new community hub. Pubs have gone full circle again. Instead of coming here premeditated on shopping or the cinema, you can have a hospitality experience, and it’s worked exceptionally well for us. It’s become daddy daycare during the day but then it’s so female-friendly and it’s become a real anchor at night.” 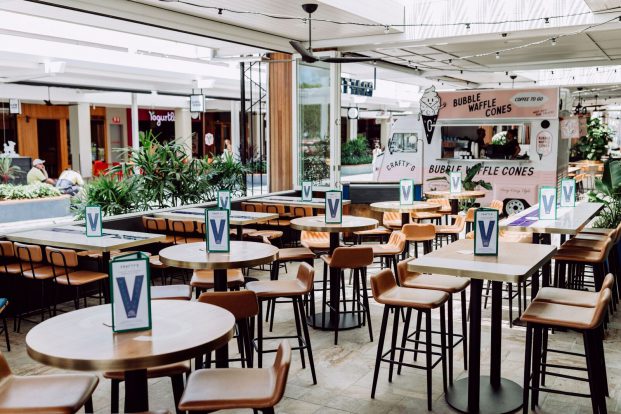 The seven-days-a-week operation sees opportunities across weekdays, weekends, daytimes and evenings. The benefits of the shopping centre, aside from ample parking, are, says Galvin, “you have the density during the day and at night we’re getting the pre-and-post cinema cocktails.”

The new venue isn’t the only experiential offering, however. The Gold Coast’s nearby Night Quarter is another experiential-focused development offering a blend of food trucks, markets, live music and beer every weekend.

“The Night Quarter is a prime example of [customers] not having to spend a huge amount of money but having a great experience,” says Galvin. “People want experience, they’re looking for that. We’re doing something unique outside of the activities and activations, we have a food truck that does desserts next to the venue, plus the other restaurants and bars. It’s day, night, groups, kids, families. There’s something for everyone.”

Having spent a great deal of time creating concepts for other accommodation hotels, including IHG, Hayman Islands, Sofitel Wentworth, Crystalbrook Collection in Cairns, W in Melbourne and the occasional hotel operator group, “this time,” says Galvin, “we’ve used our team to bring together all the knowledge and nouse and delivered a pretty exciting product.”