The event, sponsored by SevenRooms and MSL Solutions, looked at how functions strategy has changed in the face of COVID restrictions. The panel was made up of Rob Comiskey, director of Comiskey Group; Kylie Moncur, chief marketing officer of Australian Venue Co.; and Jodie McLean, director of JEM Events.

The event kicked off with the impact the pandemic has had on forward bookings for functions, with capacity restrictions and future uncertainty being the main drivers behind people’s choices to stay at home. Moncur said across the board AVC has seen a 65 per cent reduction in functions bookings as compared to this time last year, and in Melbourne that was as extreme as 90 per cent. Comiskey said it sounded about right, having seen roughly a 55 per cent reduction in functions bookings.

While it sounds particularly dire, both operators agreed that with every announcement of easing of restrictions, they were receiving an influx of functions bookings. All panellists agreed that this year’s focus was less on larger corporate bookings, and more so on smaller social occasions such as birthdays, baby showers, wakes and social group celebrations.

One strategy that has worked particularly well for McLean, was the use of hybrid events. Earlier in the year, she created a corporate event for 150 people across Sydney, in which she booked smaller function spaces across six different venues – each hosting 30 guests – and the presentations were live streamed in each venue.

“People still got to meet together, but in smaller groups. They felt much more safe that way. The content was also very polished. That was a really successful event.”

Comiskey agreed that hybrid events had opened up greater possibilities for his venues, having recently hosted one. Currently the rules in Queensland only allow 100 people to attend a funeral, so the funeral was live-streamed into one of his ballrooms for 400 people. 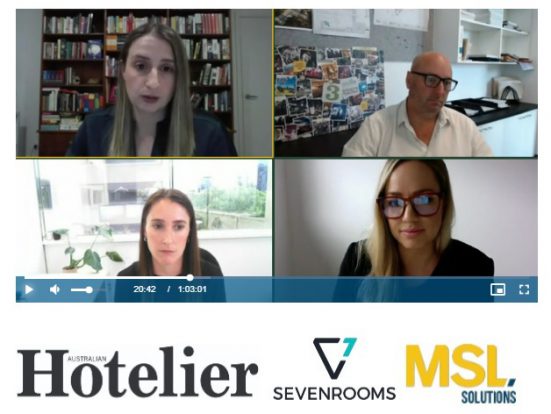 A poll of event viewers found that 70 per cent of participants have altered their functions packages, whether by changing the pricing, the F&B on offer, or both. Comiskey said they’re pricing hadn’t changed, but they had moved from communal F&B packages, to individually plated options. Moncur said they had also got rid of share plates across the company, and also reduced the minimum spend within their packages.

“Everything becomes a little more labour intensive when you remove grazing tables and people cant serve themselves. We’ve adjusted minimum spends where we could depending on capacities so in some cases we’re getting a quarter of the revenue we would for a space, but… we wanted  to make it as fair as we could for our customers,” explained Moncur.

Working from the client side, McLean had some great insights as to what potential function bookers were looking for. She said that some venues hadn’t adjusted minimum spend in response to reduced capacities, and it made it almost impossible to justify that spend per head.

The biggest takeaway for all three panellists was the importance of both clear communications and flexibility.

It’s important to ensure that you are very clear when discussing with prospective guests exactly what they will be getting from a package, and what they are allowed, as many people still just aren’t sure. And it’s this focus on the positive – what they can do, rather than what they can’t – is what makes all the difference suggested the panellists.

“I’m picking up the way venues are responding to enquiries, with things like ‘We can ONLY hold this many people’. It’s all very negative in tone, where there are other venues who get back to you really quickly and are far more positive with language like ‘Thanks for bringing this enquiry to us, we’d love to host you, this is how many people we can accommodate, this is what we can recommend’. There’s a clear difference, and I’d really be urging venues to be looking at the way they respond to enquiries,” suggested McLean.

The other critical point is to be flexible with your booking conditions, at a time of such uncertainty  and necessary caution.

“Things are changing so rapidly that you’ve got to give people the confidence not only to book, but to able to rebook it for another time without penalties. We had to do that straight off the bat. It creates bad vibes otherwise,” stated Comiskey.

“You’ve just got to roll with it. We’ve had to move functions three or four  times with no cost involved, and that’s just to keep the revenue on the books. If you’re going to do a hard and fast cancellation rule, you’re going to suffer in this climate.”

Both Comiskey and Moncur agreed that under restrictions and capacity limits, they were not currently making a whole lot of profit off functions. But more importantly, by being so flexible with their functions bookings, it had helped them re-engage with patrons who had stayed away after lockdown, and helped renew that confidence and goodwill in their venues. It’s expected by being so accommodating with their functions packages now, they will see some real ROI with return patronage and bookings next year.

The virtual event also covered the safety precautions venues were taking, the marketing strategies and software the venues were employing to aid bookings, and countering negative perception or wariness.

Missed out on hearing how these operators are handling this year’s unconventional functions season? You can view the event at any time here, you just need to register first. Check it out now.