Gallagher Hotels parts with The Royal

Patrick and Angela Gallagher have divested the Royal Hotel in Ryde in an off-market transaction.

The Gallaghers have sold the north-west Sydney pub to former Wallaby Bill Young, who takes his pub portfolio now to six Sydney venues. The off-market transaction was conducted by HTL Property’s Dan Dragicevich and Andrew Jolliffe for an undisclosed sum.

“Having originally sold the Royal to Patrick and his partner in 2014, the deal for their successful exit was particularly satisfying to be involved in. The pair have added considerable value during their tenure; adding additional machines, achieving extended trading hours as well as completely renovating the downstairs pub and activating the first-floor accommodation rooms,” stated Dragicevich.

“The Royal has always been a robust and proven cash flow generator, and as such it deserved a sale price commensurate with the material barriers to entry, including lack of available stock and the weight of investment capital looking for a foothold in the marketplace, the buyer universe is commonly challenged by.”

The Royal Hotel was last ranked 157 in NSW’s gaming rankings, and is located in the near vicinity of the suburb’s large-format shopping centre. It’s the latest acquisition for Young, who recently took over the Illinois Hotel in Five Dock and transformed it from a suburban strip joint into a family-friendly pub offer.

“The Royal at Ryde follows our 2020 acquisition and recent refurbishment of the Illinois Hotel, and fits perfectly into our geographical wheelhouse,” stated Young.

“Strategically, we are satisfied that we have now assembled a complementary mix of full service hotel offerings in a demographic we know well, and will continue to enjoy our interactions with for many years to come.”

In another off-market deal, renowned Sydney publican Jason Marlow and his wife Peta have purchased the Robin Hood Hotel in Orange via new regional pub fund they have established. The hotel was sold by the Marshall family, who have owned the hotel for 22 years.

“Our family has thoroughly enjoyed its tenure at this wonderful hotel however it is time to move on, and in doing so we are delighted to pass the reins to another family enterprise with a rich history of hotel operation,” stated Warwick Marshall.

Marlow – who operates several large-format Sydney pubs including Crossroads Hotel in Casula and the Rose & Crown Hotel in Parramatta – has been looking at regional opportunities for a few years now, and in particular within Orange.

“Having physically assessed numerous regional centre opportunities in the past few years, we have identified Orange as a geographical location with multiple revenue inputs and an underlying economic base which we feel will sustain high quality offerings such as the Robin Hood well into the future,” stated Marlow.

“Warwick and his family have done a fantastic job with the hotel, and we look forward to continuing the high level operation he has clearly provided for many years.”

The Robin Hood Hotel is set on a 32,700 sqm parcel of land, and is known for its restaurant offer, while also operating all other traditional revenue streams. It enjoys plenty of local support, while also catering to tourism and event-based patronage. 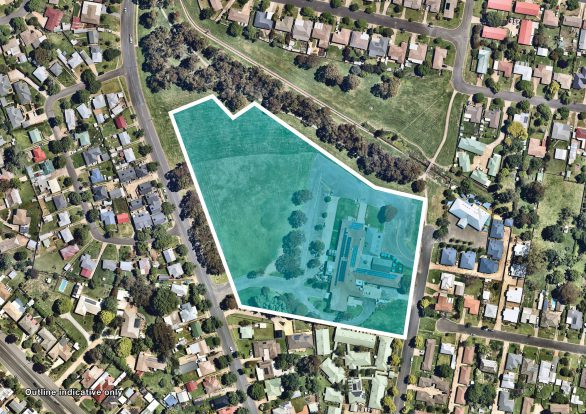 Robin Hood Hotel sits on a large parcel of land within Orange.