The hotel was sold to an investment consortium headed by property developer Max Delmege. The deal, managed exclusively by HTL Property’s Glenn Price and Brent McCarthy, along with Colliers’ Steven King and James Holand, sees the Gold Coast Turf Club entering into a lease for the premises as confirmed by Turf Club chairman Brett Cook.

“The public campaign conducted was particularly strong, and we ended up securing numerous offers to purchase; including some from the nation’s leading interstate operators seeking a strategic foothold in the south-east Queensland marketplace,” stated Price.

The 3144 sqm waterfront site includes 36 gaming machines, with approval for 4 more; multiple bars, a bistro and a deck overlooking the Nerang River. There is also significant development potential in the site, including retail, office, accommodation and apartments with a 54m height limit – equating to 18 storeys – subject to council approval.

Further south, the Good Intent Hotel and adjacent retail shopping complex in Grafton has been sold by Sharon and Rod Masen. The hotel has been in the Masen family for more than 60 years, since Rod’s late father built the property in 1957. It was sold off-market, with the deal brokered by HTL Property’s Xavier Plunkett.

The Northern Rivers pub has multiple revenue streams, which has made it an attractive purchase. A high-performing gaming venue, the Good Intent Hotel sits at 150 in OLGR’s latest rankings, with 15 EGMS. It also collects decent annual rent from the lease of the retail complex. 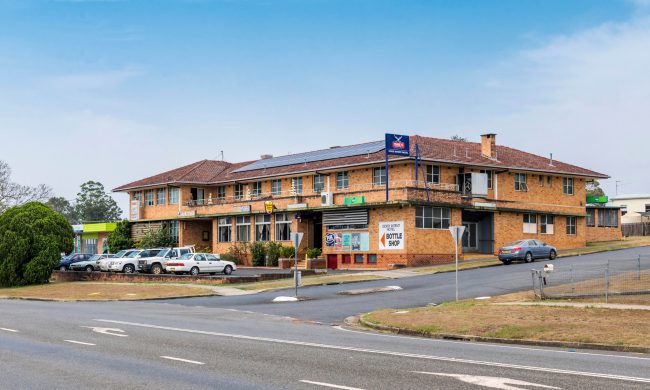 “Whilst the lion’s share of the trade is sourced from the robust gaming and bar revenue centres, the additional $100,000 per annum in passive retail rent from the adjoining shopping centre provides investment protection through profit source diversification,” stated Plunkett.

“The hotel exhibits many desirable trading characteristics sought after by the most experienced and successful publicans; including a large land-holding with ample car parking, and its prime positioning on a major arterial road with easy street access to industrial zones and strong blue-collar employment lever.”

Further opportunity for growth lies in the 20 unused accommodation rooms.