The Freshwater pub changed hands for the first time in 42 years towards the end of 2019 and after brief closures for renovations, opened the revitalised pub in February 2020, only for it to be forcibly closed just weeks later.

During the coronavirus pandemic closures, Harbord Hotel co-owners Glenn Piper and Lachlan Cottee took on major renovations to the hotel with plans to open on Christmas eve in 2020 – only to be denied their grand opening because of the December Northern Beaches outbreak. Freshwater’s original seaside pub was finally opened on 3 January.

Piper spoke to Australian Hotelier earlier this week about how the community has supported Harbord Hotel throughout the pandemic saga and how the business was able to survive throughout obstructing closures.

“When the pub did change hands it was met with a lot of anticipation on what we had planned for the venue, a lot of questions were being asked but by all reports, all regulars were expecting it to go through a refurbishment because it needed it,” he said.

“Through this whole period we’ve had a lot of support from our local community. Even when we were in the forced lockdown period. We had our bottle shop still trading and our regulars and local patrons coming through and supporting the business every way they could.”

When the Harbord Hotel was forced closed in March due to the initial COVID-19 outbreak, Piper and Cottee acted swiftly, bringing up their planned 2021 renovations to be done instead, during the pandemic.

The refurbishment drew its inspiration from Freshwater’s history and unique claim as the birthplace of surfboard riding in Australia. Patrons are greeted by a mural by local Northern Beaches artist Ash Holmes.

The exterior of the building has a new sun-bleached identity and portions of the venue that were covered up for decades have been exposed, revealing a heritage staircase and arches, and memories of bygone coastal flair. 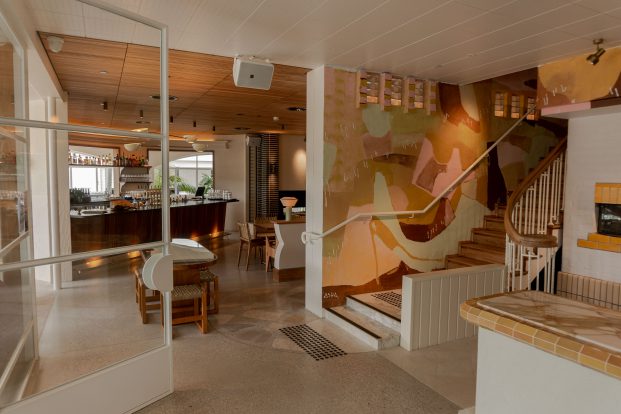 “We definitely weren’t intending to do renovations so soon, we were looking at doing them this year. We hadn’t even looked at the development application so we had to move pretty quickly in order to get it lodged within six weeks of closures. Once we did, we used that time during strict trade conditions to get most of the place refurbished,” he added.

“Since our reopening in January there has been a lot of excitement and a lot of new faces and regulars coming through. Everyone seems to love the design attributes that pay respect to the heritage of the building and the area. They’ve been very excited about the end result.” 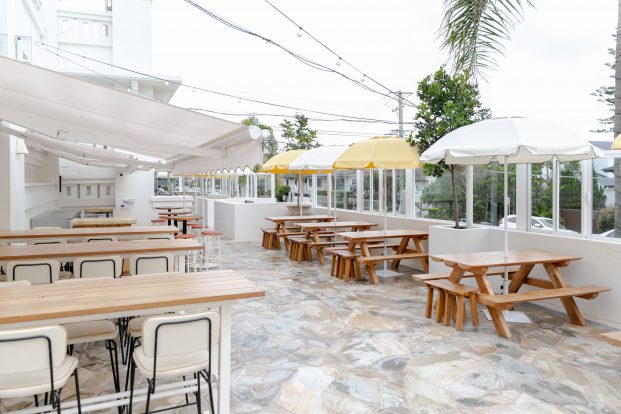 Despite all that Harbord Hotel’s owners and staff went through in 2020, one thing remained important to Piper above all else, staying loyal to serving his customers. He said the tremendous local support was one of the biggest things that originally attracted him to the building, and he wanted to ensure he did right by them.

“The building means so much to the community with how John Thorpe and Trish King built such a strong legacy when they were the owners. It was a huge responsibility to take that on so we knew we had to do the refurbishments justice.

“This is why we spent so much time and energy on understanding the history, to make sure that when we reopened our doors, it would be a rewarding experience for us because the regulars absolutely loved it.

“When we did reopen our doors we had people queuing out the front to get a table and that was pretty upsetting that we couldn’t have them in the venue because of social distancing we had to adhere to.”

Since reopening, Harbord Hotel’s popularity has not disappointed, with the January holiday period filling the venue to capacity from open until 9pm every day. As the Northern Beaches returns to the new normal, Piper said the venue is settling into its regular busy periods and is happy to see many returning locals.

On the back of this popularity, Piper and his team have now turned their attention to opening its brand new cocktail bar upstairs, which the previous owners used as residential space.

“We’re looking forward to lodging the new cocktail bar in the coming months. Again, there’s been a lot of anticipation from our locals as well. Not many people have stepped foot upstairs so they’re excited to see what the view is like up there.”

According to Piper the new cocktail bar, if approved, will open in late 2021.