While for most operators the COVID-19 crisis has put their businesses under the most intense strain they’ve ever faced, investors with available means are making the most of a receptive market when it comes to pub acquisitions.

The Lion Hotel in Adelaide, one of South Australia’s most renowned pubs, was sold last week for the first time in 24 years. The hotel was sold by long-time owners Tim Gregg and Andrew Svencis, along with the adjacent, three-level office block to new pub consortium Duxtons Pub Group. The new group is headed by esteemed South Australian hoteliers Brett Matthews, Martin Palmer and Ed Peter.

“Our partnership is excited to have been chosen to continue the great hospitality of proprietors Tim Gregg and Andrew Svencis, with The Lion well established as one of Adelaide’s favourite venues,” Duxtons Pub Group said in a statement.

“We look forward to working alongside Tim, Andrew and the team during this transition period with the aim of a much anticipated re-opening of the hotel in late September.”

The north Adelaide hotel has been closed since the original 23 March national shutdown, with most staff retained via JobKeeper. The Lion Hotel is expected to be the foundational investment asset for Duxtons Pub Group, whose trio of leadership individually operate highly regarded pubs such as Crafers Hotel, Bel Air Hotel and Paloma Bar and Pantry.

The sale campaign was led by Will Connolly and Roger Klem of JLL Hotels & Hospitality, with Connolly stating that the sale was reflective of the returning confidence in the South Australian pub market as trading conditions ease in the state.

“The sale of the Lion Hotel is a significantly positive step for the South Australian hospitality market as it continues its return to normality following COVID-19 restrictions.

“Whilst JLL successfully navigated some obvious challenges within the sale campaign, this transaction is testament to the iconic nature of the Lion Hotel, with our team still fielding numerous offers on both the Lion Hotel and 183 Melbourne Street in recent weeks.”

Meanwhile, a syndicate led by Ashton Waugh has snapped up its second hotel in Tamworth, New South Wales, purchasing the freehold going concern interest of Joe Maguire’s Hotel. The sale was made off-market, through Xavier Plunkett of HTL Property via a buy-side mandate. The hotel was sold by the Cannon family, who have owned the pub since 2004.

The property consists of a large freehold hotel with seven gaming machine entitlements, 10 accommodation rooms, large bistro and alfresco beer garden; and includes a large function space on a 3500 square metre allotment located on Peel Street, the main high street of the city.

The Waugh syndicate also owns the Tudor Hotel in Tamworth, which they’ve enjoyed a lot of success from, and wanted to increase their holdings in the city. The investment comes as the northern Tamworth growth corridor expects to see 15,000 new residents over the next 15 to 20 years.

“We will look to trade the hotel and expand the business. Whilst immediate plans are still in their infancy, an updated menu and creating a family-friendly environment with children’s playground and the obligatory live country music are high on the list. We will also look to maintain and expand a traditional offering for the public bar, gaming room and sports bar. To us, there exists obvious upside in the venue, coupled with the synergies created by our existing management structures in Tamworth,” stated Waugh.

Having negotiated the off-market transaction successfully, Plunkett expects more sales to take place in an off-market capacity in the short-term.

“Despite continued transactional success, many vendors have been reluctant to formally bring property to the market via on-market campaigns, and off-market transactions such as this will be prevalent in the short to medium term.” 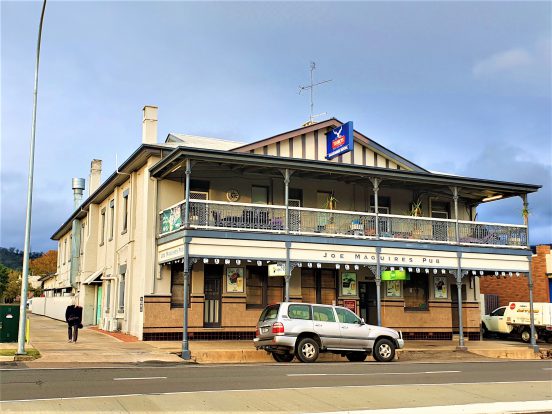