The three-year closure was unplanned, as the pub was significantly damaged by fire in the middle of renovations in 2018. Owners and operators JDA Hotels vowed to renew their renovation efforts after the fire, and the pub reopened on Friday 26 February after a three-year wait and a multimillion-dollar investment.

“It’s been a tough road for the pub. The devastation from the fire combined with the lengthy renovation has been a challenge for our team and the local community,” stated JDA Hotels CEO John Feros.

The new look of the hotel was designed by AVA Architects and includes several distinct spaces. The focal point is the new alfresco courtyard encompassing a sculptural pergola layered with greenery and protected from the elements.

The bright bistro area is full of eclectic furniture and styling ideal for casual dining. It’s also connected to the revamped sports bar which echoes the old-style public bar with its terrazzo floor tiles and historic memorabilia covering the timber walls. There are also eight new accommodation rooms on the first floor. 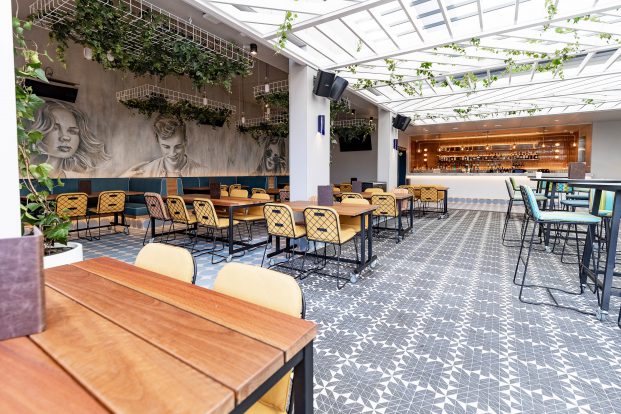 In keeping with the pub’s history of promoting female leadership – the General Gordon Hotel employed one of Sydney’s first female licensees, Bridget Smith – two women will helm the latest stage of the pub’s history. Sarah Lewis has taken on the licensee role at the General Gordon Hotel in the lead up to the reopening, and brings with her more than 25 years of experience (Howard Smith Wharves, Riversdale Group, Solotel).

Meanwhile, the kitchen will be led by head chef Kirsten Baker who has also worked within pubs like Vic on the Park in her 25-year career. Baker has created a menu of pub classics that focus on using local produce and the use of a newly installed woodfire oven.

Nods to the pub’s history have been included in its new design, including the recent fire.

“This building has had such a chequered and rich history, so we’ve worked hard to acknowledge this through subtle nods to its remarkable journey,” explained Lewis.

“Both the front and back bars feature charred wood in memory of the 2018 fire and the original heritage façade has been refreshed and revived to its former glory.”

Over the weekend, many nearby residents were eager to check out the pub that they’ve kept a keen eye on for the last few years.

“The locals of Sydenham have already embraced the General Gordon being back.  They are super impressed with the new fit-out but also love reminiscing about the old girl. They have such fond memories of the venue and are so happy with the love, time and effort put into the place to get it restore,” stated Lewis.

JDA Hotels recently doubled down on their commitment to the General Gordon Hotel, buying out the ownership stake of their previous partners in the pub, White and Partners.