The Comiskey Group has opened its 4.5 star hotel, completing the $45 million dollar accommodation and retail complex adjacent to its award-winning Eatons Hill Hotel. The offering takes pub accommodation to a whole new level of luxury.

Twenty-five minutes north of Brisbane’s CBD, the famed Eatons Hill Hotel is nestled in Queensland’s Moreton Bay region. The pub is famed as a large-scale entertainment venue on over 3 hectares of land, hosting everything from boxing matches to concerts on its lawn. The likes of Prince and Boyz II Men have performed at the venue.

While a huge pub in its own right, the Comiskey Group had always planned to include a standalone accommodation and retail offering on the property. Nine years later and the Eatons Hill offering now includes a 90-room, 4.5 star hotel building, plus a connected retail village that includes a Woolworths supermarket, bottleshop, pharmacy, hairdresser, barber, café and more.

“We always saw it as a natural complement to the pub,” says director Rob Comiskey.

The hotel capitalises on several different accommodation markets, the most significant being the corporate stay. The property is adjacent to Brendale, a growing industrial estate, which when fully developed will be one of the largest in the country. It currently houses businesses like Super Retail Group and Aldi.

The property is also adjacent to the South Pine Sports Complex that hosts many various state and national competitions for a variety of different sports – where those coming from afar would need somewhere to stay for the night. There are also many wedding venues in the area, giving the Eatons Hill Hotel a vast market to draw from.

To oversee hotel operations, Comiskey Group has brought on Murray Rowbotham as general manager. Rowbotham has an extensive history in Brisbane accommodation, including at Stamford Plaza, Emporium Hotel and Gambaro Group. He began working with the Comiskey Group on the project six months before opening, bringing his own understanding as to what features and services make for a lavish accommodation experience.

“The Comiskeys know hotels and they do it so well, but I’ve been able to help bring some insights into the accommodation side of things – looking at the products we needed to bring through and where we sourced them from, and then bringing them here to bring a similar standard, to bring that 4.5 star feel.”

With construction, architecture, and interior design backgrounds throughout the Comiskey family, the group was hands-on with Cox Architecture in designing the luxurious hotel with finishes deserving of the most grand of hotels. Three architects from the firm worked on the design of the mammoth hotel for a year, with Rob and brother Dave consulting and making changes with the team on a weekly basis.

The result is a grand and lavish hotel that vastly exceeds expectations of what both pub and suburban lodgings should look like.

Each bed uses a Sealy Dynasty mattress – used by some of the most lauded accommodation hotel groups in the country – with both a pillow topper and feather and down topper. The curtains are made with Warwick fabric to block out the sun for a good night’s rest. The bathroom amenities are from the Appelles Black Label range, while the mirrors in each bathroom are backlit with lighting to ensure that no shadows are drawn across the face while applying makeup. On the technological front, the TVs in the rooms are each equipped with a premium Foxtel package, and Netflix compatibility, so guests can watch exactly what they want to at any time.

The hotel is far more luxurious than was originally planned but Rob Comiskey says that is generally the way his family operates, having spent $30 million each on the Eatons Hill Hotel pub, and their other venue Sandstone Point Hotel.

“We don’t do things by half. We’re seen as massive risk takers because we do stuff that people don’t usually do, but we see it as a calculated risk. We always say if you build something special, it’s like that Field of Dreams thing, ‘if you build it then they’ll come.’”

Eatons Hill Hotel’s luxury extends further than the rooms, with a striking lobby/foyer area that features cashmere gold granite imported from India, tasteful brass finishings, the fully stocked Lounge Bar for patrons, and a massive eye-catching artwork from O’Brien. The building also houses a heated pool and gym, and the Hills Room function space, that can be used for anything from board-room style meetings to dinners for 300 people.

This feature was first published in the March issue of Australian Hotelier. Continue reading the feature here. 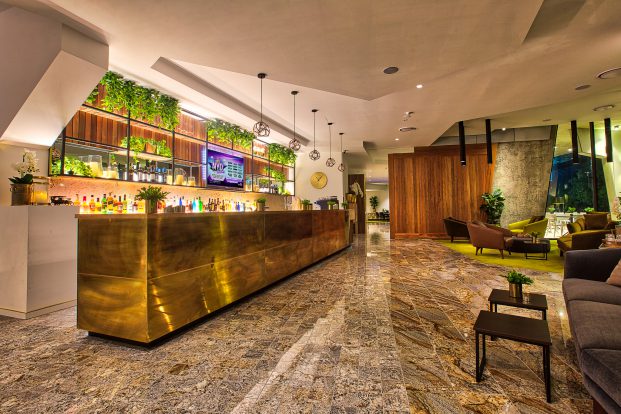