Both Sydney and Melbourne have seen recent sales of pub leaseholds within their CBDs or on the fringes, suggesting that operator confidence is slowly returning to city markets.

Sales data and operator experiences across the country have suggested that in the post-lockdown environment, suburban and regional pubs have seen the strongest return of patronage, while CBD and surrounding areas have suffered from the lack of corporates, tourists and day-trippers.

This shift of patronage has been heavily reflected in pub transactions of the last year, with regional pubs – particularly within coastal and tourism regions – attracting a lot of demand, as well as suburban pubs.

But recently, leasehold transactions have been announced in both Sydney and Melbourne suggesting that some confidence in metropolitan assets is returning.

First was the acquisition of Mountbatten Hotel in Sydney CBD’s Chinatown district by JDA Hotels. The group – which owns several Sydney suburban pubs, and two Gold Coast venues – paid $7.5 million for the leasehold interest of the CBD venue. JDA Hotels also owns Great Southern Bar, less than 100m down the road, and Charlie Chan’s Hotel nearby.

The leasehold of Mountbatten Hotel was sold by Surfside Hotels, which has operated the pub for the last 20 years. The off-market transaction was negotiated by HTL Property’s Dan Dragicevich and Sam Handy.

“The Mountbatten has been a great venue for Surfside Hotels and complemented our portfolio of Southern CBD assets,” stated CEO Carolyn Kelly.

“As such, it gives me great comfort to know that another group so heavily invested already within the precinct, are taking the keys and will no doubt continue to serve the local community well.”

The Mountbatten Hotel features a 3am liquor licence with a three-hour weekend gaming shutdown and 25 EGMs. The hotel was ranked #490 in the September 2020 rankings, however, was previously consistently ranked in the Top 200 prior to the closure of George Street in 2015 for the commencement of the light rail construction.

“The Chinatown precinct is notoriously tightly held, and consequently very keenly sought after by the market for its intrinsic fundamentals,” stated Dragicevich.

In Melbourne, Colonial Leisure Group (CLG) sold the leasehold interest of Bimbo in Fitzroy to Australian Venue Co (AVC). The off-market transaction was handled by JLL Hotel & Hospitality’s Will Connolly.

The centrally-located  Brunswick St mainstay, known for its cheap pizzas and late-night entertainment has long been a beloved institution in one of Melbourne’s key nightlife precincts. It also holds a 3am license.

In a sign of returning confidence in Melbourne F&B propositions, the sale was negotiated and transacted within a few days.

“The speed in which this iconic venue was secured certainly is pleasing and no doubt provides encouragement to other pub operators across Melbourne who may be considering the potential divestment of their venue,” stated Connolly.

“The leasehold pub market is once again building momentum as operators start to enjoy a sense of certainty. This sale, along with our recent off-market transaction of the Grosvenor Hotel, St Kilda, provides scope for further transactional activity as the year progresses.”

Patron confidence is also returning to CBD venues as shown by consumer spend data. A twelve-month analysis of me&u’s data has shown that the business at city venues has shrunk 23 per cent, year on year, while suburban venue trade has actually increased by 14 per cent.

However, since December 2020, CBD venues have grown at a faster rate than suburban venues, as the easing of restrictions and the return to office-based work renews confidence in capital city venues. 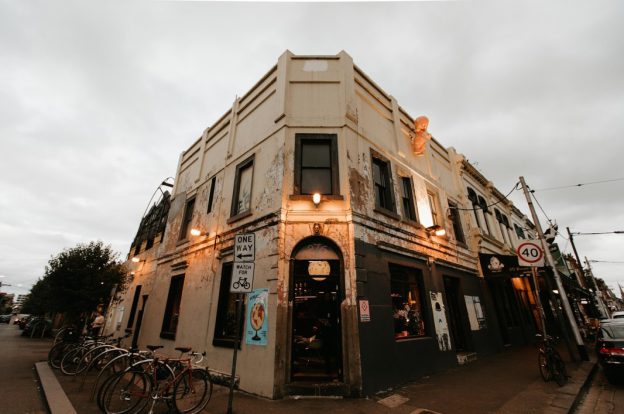 Bimbo is centrally located on Brunswick St, one of the city’s busiest nightlife precincts.