The most dynamic venues and operators in Queensland were celebrated on Monday night at the 2019 QHA Awards for Excellence.

QHA CEO Bernie Hogan praised the contribution the state’s pubs and hotels made to the tourism industry.

“The awards celebrate those wonderful businesses throughout the state that breathe life into the “Beautiful one day, Perfect the Next!” slogan each and every day.

“With new entrants into the industry throughout the regions and Brisbane, the job of the judges has never been tougher.”

The Lifetime Achievement Award was presented to Bernie Power, noted for his work in pubs, brewing and sport.

“Tonight we also acknowledged a true icon of the Queensland Hotel industry in Bernie Power. Many will remember Bernie as the driving force behind Power Brewing and the establishment of the Broncos however, before then and for many years since Bernie has been a publican and strong supporter of the QHA,” stated Hogan.

Hotel of the Year was awarded to The Glen Hotel in Eight Mile Plains. The hotel has been owned by the Fitzgibbons family for 60 years, and has evolved from a small suburban pub into a slick operation that offers accommodation, multiple food outlets, entertainment and conference facilities.

Owner Brian Fitzgibbons – in the middle of enjoying an ice cream when the win was announced – said that getting the hotel to such a standard of excellence had taken a long time and involved a lot of effort.

“It’s a lot of hard yakka running your own business, but it’s a privilege. Seeing happy customers return to the hotel who may have first visited 50 years ago and still remember how it used to be, and revel in how it is now…makes it all worth it.”

The major individual award, Hotelier of the Year, was bestowed on Matthew Coorey of the Boardwalk Tavern a Sanctuary Cove on the Gold Coast. Coorey  is considered one of the rising leaders in the state’s hotel industry, and as an hotelier in one of the country’s tourism hot-spots he continually works to keep his venue at the forefront of innovation. 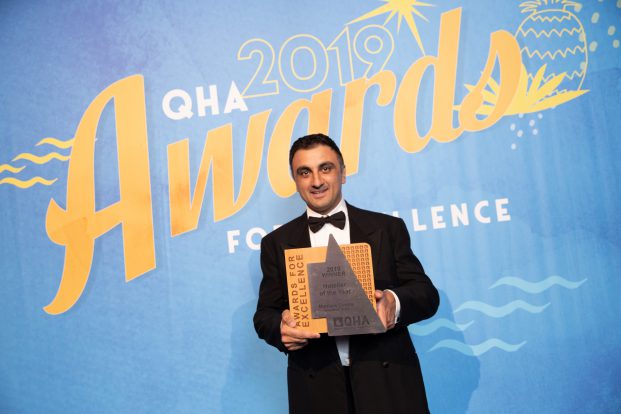 “It was extremely humbling and a massive surprise to win this award. It’s not an award you nominate for and definitely not something I thought I would ever be chosen for,” Coorey told Australian Hotelier.

“With so many amazing publicans innovating, engaging their local communities and re-inventing their hotels every day, it was a true honour to be thought of for this award.

“In the end whilst my name is on the plaque it’s a reflection of the team I have around me, including our amazing staff at The Boardwalk Tavern and of course, my wife, Giulia, who without her, none of what I do happens.”

The entire list of winners at the QHA Awards for Excellence can be found here.