Privately-owned hospitality group, Sand Hill Road bought The Espy in May 2017 and have spent the past 18 months restoring the seaside icon. The property now features 12 bars, two restaurants and three stages as the group looks to create “a new pub and cultural destination where all Melburnians feel at home.”

The group have also opened up private parts of the building to the public, expanding the public offering from three levels to six. The most notable addition is that added by opening the top level originally lived in by Alfred Felton, a wealthy entrepreneur, art-lover and philanthropist who lived and died in the hotel in 1904.

The 1970s-inspired Studio Bar is built around a fully-fitted Podcast Studio, a space that patrons can book to record podcasts. A 120-person mezzanine-level function room offers views over the bay. 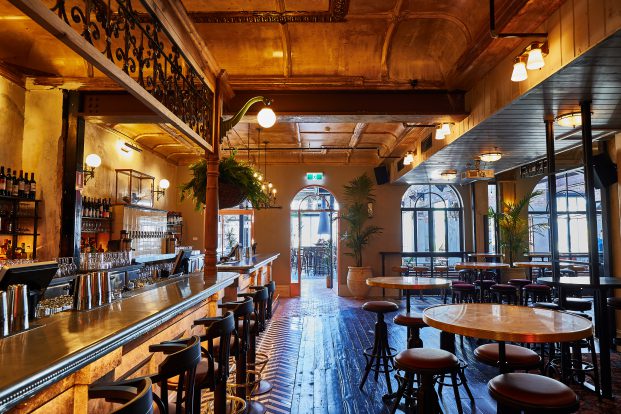 An ambitious programme of live music, arts and culture will support the venue’s extensive food and beverage offering. Food and beverage is spearheaded by Executive Chef Ash Hicks and a 60-strong chef brigade operating out of an open kitchen featuring charcoal grills, twin wood-fired pizza ovens and a Rotisol French rotisserie.

Kevin Peters, Sand Hill Road Group Bars Manager, and Matt Skinner, Group Sommelier, have developed a comprehensive drinks programme for the venue, creating cocktails ‘with a coastal sensibility.’ The duo have also spent the last six months developing an impressive aged barrel drinks programme, with spirits and cocktails made on site in 28L custom-made barrels in The Espy’s own ‘rickhouse’.

The design was a collaboration between Sand Hill Road’s stylist Eleisha Gray and TechnēArchitecture + Interior Design, who have a relationship spanning the last 10 years. Between them they have curated a selection of imported furniture and decorative objects, featuring a series of hand-painted, period-style murals by Perth artist Desmond Sweeney (8 Foot Walls), including one filling an eight-metre wall in the artist green room.

“The Espy has always been our ultimate pub dream,” says Doug Maskiell, co-founder of Sand Hill Road. “But it’s also an awesome responsibility. Every day, we’ve uncovered layers and layers of The Espy’s history that have absolutely blown us away.”

More details will be revealed in Australian Hotelier’s December 2018 issue – sign up to the newsletter below to be alerted when the new issue is available.