Solotel goes Cuckoo at The Marly

Solotel will officially open Cuckoo, a new bar offering in The Marlborough Hotel in Newtown, on Friday night.

Cuckoo will replace the first-floor, southern-themed eatery known as Miss Peaches, and its offering will put a twist on an Alpine beer and schnitzel house. The refresh is part of Solotel’s strategy to reinforce its place in Newtown’s nightlife.

“The Marly is going through a transformation to reinstate its relevance and reputation in the inner west. Having such a strong music focus downstairs we wanted to create a space upstairs that lived between eatery, bar and entertainment venue. It had to have its own identity, but also resonate with the rest of The Marly,” stated Tara Sullivan, Solotel’s experience director.

The concept for Cuckoo was created in collaboration with International Worldwide and Monster Children, and includes mock Tudor walls, alpine fresco windows and a large beer hall table. There’s even a climbing wall.

“The idea of twisting a traditional beer and schnitzel house into an entertainment-led bar felt crazy enough to run with. We threw thoughts around the table, conversations started to lean into places like Barons in the Cross and we felt that we were on our way to something unique.  Collaborating with International WorldWide, who share our values of pushing boundaries and creating fun spaces, was a great design partnership for us. We have enjoyed playing with the style, experience food and beverage to deliver something a little left of centre,” explained Sullivan.

As part of the concept, bar manager Drue Stevens has put together a drinks list that includes house-infused Schnapps including flavours such as Almond Honey, and cocktails such as the ‘Apfelschorle’ with hints of cardamom, ginger and sour apple. The beer list also leans towards German styles, including Waywards Brewing Co’s  Raspberry Berliner Weisse and Batch’s limited edition ‘Oktoberwest’, all served in intricate steins or Cuckoo’s signature serve “Das Boot” – literally a glass shoey.

The food will focus on German favourites such as schnitzel, kransky and spätzle, but a big attraction will be the pretzels that are complimented by The Condiment Kingdom – a variety of sauces that the bready snacks can be dunked in.

Sulivan said that different aspects of Cuckoo will allow the space to lend itself to different patron experiences, day or night.

“Cuckoo transcends across time periods easily by offering a menu and beverage range that could lend itself to an early diner coming in for schnitzel and beer, to late night snacks, haus -made schnapps and a game of Ping Pong, to a boogie on the dance floor into the evening. There are no limits with Cuckoo, you just have to be willing to embrace the fun.”

Cuckoo will complement the broader Marly Hotel offering through the bar program designed by Stevens, and its celebration of music crafted by local upcoming artists. 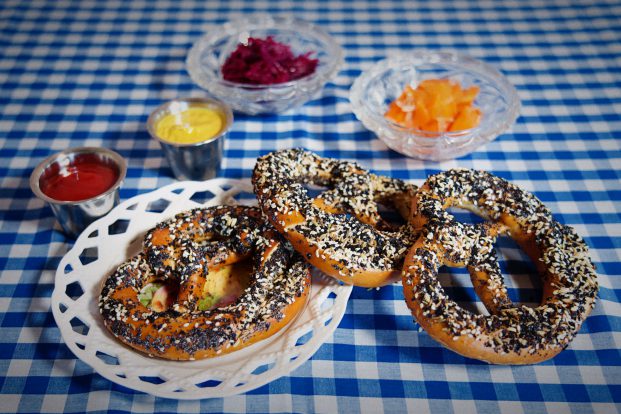