Don’t be left in the dark!

Join over 16,000 liquor and hospitality professionals and sign up for TheShout’s newsletter Get the industry news first – delivered to your inbox

Solotel has collaborated with inner-city Sydney newspaper Neighbourhood to create its own custom insert ‘The Local’, which focuses on the stories of the people and events within its venues.

In an innovative marketing strategy, the group has collaborated with the publishers of Neighbourhood, to create a bespoke 16-page insert that is sent out quarterly with the monthly newspaper. Neighbourhood has a distribution of 77,000 among homes and businesses in the inner-city Sydney area.

‘The Local’ was first conceived after the Solotel marketing team became aware of Neighbourhood late last year. After meeting with the newspaper’s publisher, the concept evolved over some shared principles.

“I’d heard about their publication on the grapevine and was really intrigued by their whole approach and their ethos. I like their tagline about unity and diversity, which hits home with the values of what we do in our venues,” explained Danni Bluston, marketing manager for ten of the group’s  venues, mainly in the inner west.

Content in ‘The Local’ focuses on telling interesting and engaging stories of the people in Solotel’s venues – both staff and patrons – as well as focusing on bigger issues within the Sydney nightlife scene. For example, in the first issue of the insert, stories include portraits of the people who frequent the Courthouse Hotel; a feature on a local hockey team that gathers at The Erko to celebrate or commiserate; plus a look at the women who run some of Solotel’s inner-city pubs – all without mentioning Solotel itself.

None of the content in the insert focuses on direct calls-to-action to frequent the venues, which was a deliberate strategy on the group’s part.

“From my point of view as a marketing manager of these venues, they’re really unique and individual; they’re really rooted in their communities. So I think it’s a bit of a challenge approaching it from a marketing perspective, because the traditional approach of using social media platforms [for content] like ‘5 new flavours of espresso martini’  all starts to sound the same. So this publication doesn’t feel like we’re selling or advertising anything, but instead we’re showcasing the true nature of the venues,” stated Bluston.

To gather the content for ‘The Local’, Neighbourhood’s editorial team visited several of the group’s venues, and spoke to staff and patrons to gather stories of the goings-on of the pubs. Bluston made a point of taking a step back and allowing the venues to lead the direction of their content, so as to really encapsulate those venues.

“I think this is a lot more authentic. And I know that’s a word that gets really overused, especially to do with any kind of marketing, but I think the nature of these venues and the audiences that go there is their connection to the people, the history, friendship and having a good time. So I knew this would resonate a lot better than trying to sell the venues.”

Her only guidance with the editorial team was to ensure that the big topics that the group as a whole is discussing, were also shared with Neighbourhood readers – like women in hospitality and the future of a vibrant Sydney nightlife.

The recent publication of the first issue of ‘The Local’ has been well received within Solotel, with plenty of the group’s other venues now stepping forward with story angles of their own. Group marketing director, Dan Lacaze, has been thrilled with the outcome.

“Solotel’s partnership with Neighbourhood, through ‘The Local’, is a really important platform to communicate our diversity as a group. What Neighbourhood brings is a quality of journalism that is authentic and real. Our people connect with locals in our pubs every day, and that’s why they have been so thrilled with helping craft these stories, and the printed result.”

The issue is also resonating with Neighbourhood readers, many of whom have got in contact with the venues featured to express their enjoyment of those stories. Bluston suggests the upcoming issues will cover more of the group’s city venues.

“I think there’s definitely scope to widen the net. It’s just led by the characters of the venues, and also by venues that have a bit more going on in the upcoming three months in terms of their product. We just need to make sure it’s always being led by the venues, rather than us pushing any specific sales agenda.” 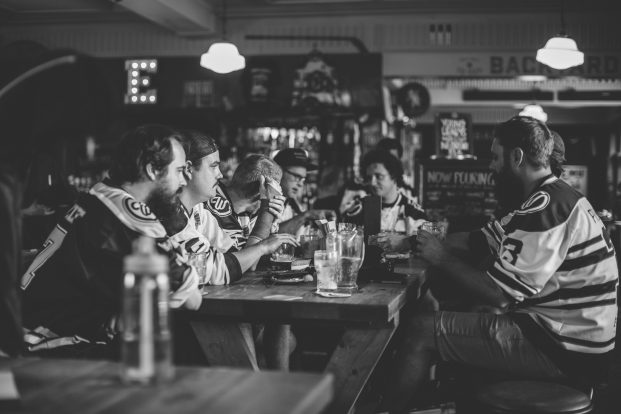 The Erskinevillains team at The Erko are featured in The Local.