AHA NSW told the enquiry 25 member hotels front directly onto the light rail route, with more in close proximity to the route. They say their members have been hit hard by the extensive construction work that was due to be completed last year, and in some sections back in 2016, but which is still incomplete.

AHA NSW’s Deputy CEO, Sean Morrissey, told the inquiry in a written submission: “Our members are simply seeking transparency and certainty around a compensation package that provides full and fair redress for the ongoing losses that have been suffered as a result of the project.”

Continuing, Morrissey submitted: “For all members along the route, the impacts on their businesses have been many, and significant. Road closures, power, water and utility outages whether planned or due to incompetence, bollards, hoarding and obstructions to patrons entering or exiting venues, noise, dust, mud and other impacts are all examples of the issues that have arisen that have deterred patrons from attending member hotels.”

The inquiry heard of the hardship being suffered by two particular hotels, The Shakespeare and The Strawberry Hills Hotels.

“They have been owned and operated by the Hargreaves family for more than 40 years,” said Morrissey.

“They have seen a 40 per cent downturn in sales at the Shakespeare Hotel since work began. There is no end in work expected soon.”

“Through places like Surry Hills, the construction has seen the removal of over 100 car spaces along Devonshire Street that will not be returned once construction is completed. Many of the patrons in this area do so for food and entertainment and therefore drive. The removal of these AHA NSW parking spaces has resulted in direct financial losses for these venues.” 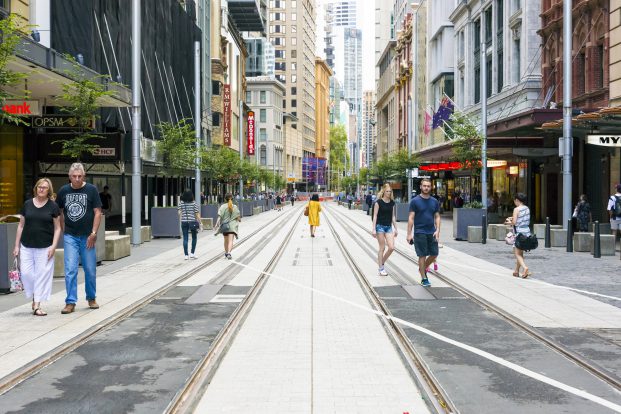 Turning to the issue of compensation, Morrissey told the inquiry: “Transport for NSW speaks in relation to ‘financial assistance’ or ‘relief’ (not compensation) from a perspective of ‘overstay’ – the period of time from when the project was intended to be completed in an area and its actual completion date. It is our experience that the financial compensation process has been totally inadequate for our members.”

While AHA NSW members were initially offered no compensation, rent relief came onto the table subsequently, but only to members with fewer than 20 full time equivalent employees.

“The ongoing delays continue to impact upon businesses along the route,” Morrissey told the inquiry, “with no firm indication of when the barriers will be removed and when the line will be operational.”

“Whilst some precincts may return to a level of business activity similar to that prior to the commencement of the project, there is no compensation being offered for losses during the almost three years that the project has been underway for many of our members, and there is every indication that some businesses along the route will never recover.”

Responding, inquiry member the Hon. Trevor Khan said: “As in all capital projects which change the nature of traffic flows around businesses, if there is short-term pain but long-term gain from the project not only for the city as a whole but also for the businesses along the route, why should there be compensation in the strict sense for the businesses that are going through the short-term pain but will receive the long-term gain?”

Morrissey responded for AHA NSW, saying: “The position of the association is that any potential long-term gain is something that ought to be modelled into the way a compensation package should be framed.”

The inquiry Chair, Reverend the Hon. Fred Nile closed by saying: “We hope your members will not be discomforted as much as they have been in the past, and that the light rail may bring a lot more patrons and prosperity to the light rail route and to those premises.”