Former Newcastle publican Wayne Lambert has acquired the leasehold of the Olympic Hotel in Paddington off freehold owner CK Realty.

Located on the corner of Regent Street and Moore Park Road – one of the Eastern Suburbs’ busiest thoroughfares – the hotel offers a public bar, large dining room with a separate bar, commercial kitchen, and 15 EGMs currently residing in a non-smoking room.  The accommodation rooms will remain under the management of CK Realty.

Sitting on 533sqm, the Olympic Hotel stands to benefit significantly from the $828m redevelopment of the Sydney Football Stadium, the $2.9 billion light rail network and general revitalisation of the Moore Park precinct.

“I’m excited to return this heritage pub back to its former beauty.  The hotel will provide a warm and friendly atmosphere for locals and visitors,” stated Lambert.

The sale was handled by Kate MacDonald of JLL Hotels & Hospitality on behalf of CK Realty. MacDonald suggests the Sydney metro leasehold market is stronger than ever, despite trading restrictions.

“This transaction marks the third Sydney leasehold sale negotiated by the team at JLL Hotels in as many months, joining the recent sale of the Foresters Inn, Surry Hills and the Native Rose Hotel in Rozelle.

“Operators are still thirsty for trading opportunities especially in Sydney fringe and suburban locations. The Olympic has certainly seen some challenges over the years with the changing landscape of Paddington, but the near term prospects look significantly brighter and everyone will be thrilled to see this iconic Sydney pub come back to life.”

Lambert plans to significantly improve the façade of the building, enhance the gaming and wagering offering, and provide patrons with approachable F&B options. 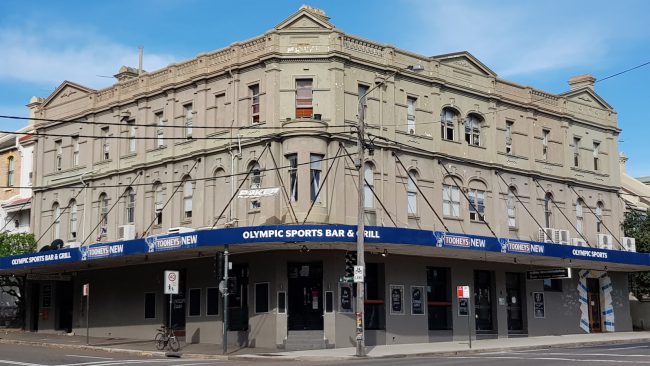 Meanwhile in Darlinghurst, Moelis Australia Hotel Management (MAHM) has acquired the Courthouse Hotel on Oxford Street for $22 million excluding transaction costs. It’s the first time the corner pub has been transacted since 1990.

The freehold going concern acquisition is being funded through a new Moelis Australia Courthouse Fund, enabling unique access to this specialist asset class. The investment platform allows for leading levels of governance and capital management, with the innovative funding model providing access for both Moelis client investment and operational managers to invest in the hotels they operate, creating material stakeholder alignment.

“The acquisition of this historic venue in the heart of one of inner-Sydney’s most diverse and dynamic precincts presents an exciting opportunity,” stated MAHM CEO Dan Brady.

“The landmark community hotel has a prominent place in the history of the Darlinghurst and Oxford Street community. MAHM will honour this as we look to re-establish the hospitality heartbeat of Taylor Square through a refurbishment that celebrates its significant heritage. We anticipate the refurbishment work, coupled with our staff engagement and community advocacy focused operational model will deliver attractive returns for investors, enhanced and enriching experiences for Darlinghurst patrons and a fantastic opportunity to reimagine the late-night economy with Sydney as it opens up post COVID.”

The off-market sale of the four-level pub and its adjacent commercial property was handled by HTL Property’s Dan Dragicevich, Andrew Jolliffe and Sam Handy.

“The Courthouse has to be one of the most recognisable pubs in Sydney and having been in the same hands for over 30 years, the uniqueness of the offering attracted significant interest from a broad range of buyer profiles. The widely held view is that Oxford Street is in for a renaissance in the years to come as astute investment houses and developers seek a foothold in what will be the city’s only 24-hour precinct following the reshaping of the lockout laws,” stated Dragicevich.

The Courthouse Hotel has a 24-hour liquor licence seven days a week, with only a three-hour gaming shutdown. It also has 24 EGMs, nine accommodation rooms and approval for outdoor dining.

Settlement of the acquisition is anticipated in February 2021.