The Fiddler in Sydney’s north-west has made a $100,000 donation to four local fire brigades.

It’s the biggest single donation the pub has ever made.

The idea started off small, after the devastating bushfires at the beginning of 2020. A staff member approached Brad Jenkins, head of the Lewis Land Group’s leisure division, asking if the group would match any donation made by the pub’s staff after pooling and donating their tips. Jenkins agreed, and the staff raised roughly $2300 which was matched. But as the impact of the bushfires on the community continued to grow, the team at The Fiddler kept thinking about how they could do more. The Lewis family, owners of the business, stepped in and made the decision to put forward $100,000 in donations through the Lewis Foundation.

“The team at The Fiddler had the ability to pitch where we wanted the money to go. For us it was the local fire brigades, and we decided to split it four ways between the local brigades that could do with a substantial amount of money, investing in equipment and upskilling their people,” explained The Fiddler’s general manager Tara Bonser.

For the local fire brigades, the donation has been quite overwhelming. It far outstrips anything they could raise on their own. One of the local firies told Bonser that the $25,000 donation was the equivalent of that brigade hosting two Bunnings barbecues a year for 12 years.

“They’re absolutely blown away. It was so surreal. When we first let them know, I think they thought it was a bit of a joke at first!”

Each of the brigades is currently trying to figure out the best use of the money, but one main priority that has emerged is the upgrading of equipment. In the meantime, The Fiddler will continue to support their efforts by getting them involved in events throughout the year.

“We’re looking at how we can engage and involve them this year, to increase the community awareness of what they do.” 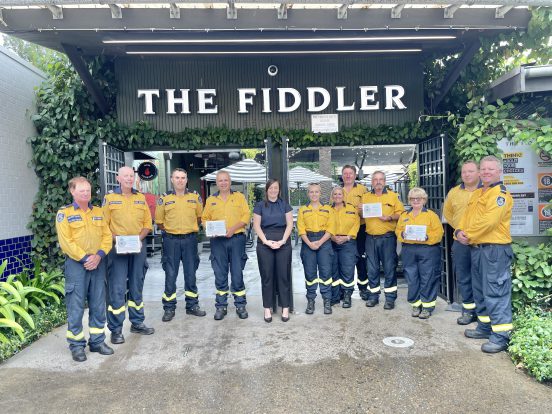