The Marion Hotel received top honours at the Australian Hotels Association SA Hotel Industry Awards for Excellence 2020 earlier this week, after being named Hotel of the Year. The hotel received the most coveted award on the night to go along with several others.

The Marion recently finished $20 million refurbishments in September 2019, bringing in a new lease of life. It features an extensive focus on hotel style accommodation, food and beverage, functions, retail and gaming, all areas of the hotel have been refurbished along with a refreshed brand and personality emphasising interaction with the customer. It is part of the Hurley Hotel Group (HHG) which oversees nine other hotels.

Hotel manager Anna Hurley said she and the entire group were overwhelmed with their success on the night. She said her staff at The Marion and throughout the HHG venues have put in a lot of hard work and deserve the recognition.

“I think we have an amazing hotel here and I think our customers love coming here as well,” she added. “I’ve always thought we provide an incredible service. It was a huge honour to receive so many awards especially considering the high calibre of hotels in South Australia.

Topping off the successful night for The Marion was Functions Manager Jessica Bellwood, who was named the Employee Excellence in Service – General Division award. Bellwood received the award for her commitment to the hotel, improving both the quality and profitability of the events and functions business at the hotel. 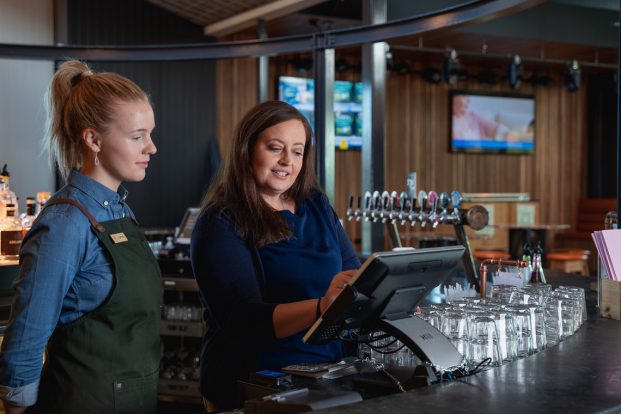 “She’s put some incredibly hard work in the past 12 months, and really helped build this business into what it is. So it’s an incredible credit to her as well,” Hurley said.

Despite their recent success, the Marion staff are not becoming complacent, and are turning their attention to improving an already stellar reputation.

“We really want to consolidate and improve on areas where we think needs improvement. We all want to get better at different things. And that’s a big focus for us this year, we’ve done a lot of things really well. But we want to get better, work out what our customers want and serve them better. and identify opportunities where we can agree.

A total of 35 awards were handed out on the night with all state winners automatically qualify for the AHA National Awards to be held on 13 September 2021 in Hobart. Mount Lofty House in the Adelaide Hills cemented its position as the premier luxury destination in Adelaide, receiving two awards: Best Deluxe Hotel Accommodation and Best Restaurant – Accommodation Division for the iconic Hardy’s Verandah Restaurant.

The Sailmaster Tavern won the title of Best Bar Presentation & Experience – Metropolitan. Overlooking the picturesque North Haven Marina, the bar at the Sailmaster has been extensively renovated with multiple areas designed to take advantage of the spectacular view.

Several hotel groups were also inducted into the AHA|SA Live Music Hall of Fame on the night. Fahey Hotel Group, Hurley Hotel Group, RD Jones Group, The Gov and the Tonkin family were all acknowledged for their multi-generational family commitment to the well-being of live music gigs, the employment and engagement of musicians and technicians, and their support for innovation and entertainment in SA hotels.

Congratulating the award winners was AHA SA General Manager Ian Horne said every year the AHA|SA Awards night is an important event for our industry, and celebrates the exceptionally high standard of hotels in South Australia.

“But this year our Awards for Excellence is even more meaningful after such a tumultuous 2020 for the industry. Tonight, we acknowledged and celebrated an industry that is resilient and innovative, strong and courageous. We thank the community and the people of SA for supporting our great industry throughout 2020, and in turn the 26,000 people it employs,” Horne said.

The full list of award recipients can be found below:

Chef of the Year – Kevin Martel