The Prairie Hotel pops up a feral feast in Adelaide

Many hotels pivoted their offering to takeaway during the shutdown, giving locals a taste of the pub from afar and generating a little much needed revenue. But when you can count the town’s population on one hand, takeaway probably isn’t a viable option.

That’s the case for the Prairie Hotel of Parachilna in the South Australian outback. Jane Fargher, who owns the hotel with husband Ross, told Australian Hotelier about the situation they faced out there in the Flinders Ranges.

“We’re local station people and this is our 29th year at the Prairie. We’ve certainly weathered a lot of highs and lows in the industry before, but never anything like this,” Fargher said.

“Because of the remote location that our business is in, with a town population of three, when we shut down in March there were really very few options available to us… the fact that we had nearly zero population, combined with the travel restrictions to our region, it just really prevented us from actioning any initiative from Parachilna,” Fargher said.

The Prairie Hotel didn’t let location stop them though, instead, taking their offering on the road and setting up a pop-up location on O’Connell Street, Adelaide. Fargher said they were already aware of the venue on O’Connell Street, and approached the owner with their idea after finding out the space was vacant because of the pandemic.

“The idea was that we would migrate a small Prairie team to Adelaide for winter, because of the uncertainties of when we were going to be able to open again in the Flinders Ranges,” Fargher said.

“It was certainly never a way that we envisaged making money. We thought that it was a way of just maintaining a workforce and also a presence. There’s actually a lot of criticism about businesses remaining closed, but at least we are able to say that we’re closed here but we’re brave enough to try something in Adelaide.”

A small team of staff has relocated to the city temporarily to operate the pop-up, serving iconic menu items from the hotel for both home delivery or takeaway and more recently eat in, with a current capacity of 12 people. It’s a mini Prairie Hotel experience that features native Australian ingredients and ‘feral’ food, which has quite an impressive following despite it’s usual remote location.

As Fargher said: “Sampling our Prairie cult Flinders feral food menu has been widely recognised as an unmissable outback experience in travel itineraries. One of our signature dishes, the feral mixed grill, some years ago was listed in the top hundred gourmet experiences in Australia.”

The success of this menu theme in Parachilna has transferred to Adelaide, becoming a point of difference in the huge range of takeaway meal options currently available across the city. For example, Prairie on O’Connell serves a kangaroo parma, goat curry, emu or camel burgers, bush margherita pizza and quandong (native peach) pie, just to name a few. There’s also a native twist on a tasting plate with the feral antipasto.

“For our antipasto we do an emu liver pâté, we make our own bush tomato chilli jam, it has goat cheese, kangaroo pastrami… so it really creates an interesting tasting plate that’s not too intimidating for people, just small samples of all of those different meats,” Fargher said.

Also available through the Prairie pop up is their own beverage brands, including Fargher Lager and Flinders Range Wines. Fargher said they had an excess amount of this stock at the hotel, as they were preparing for another busy year, following the great tourism numbers in the Flinders Ranges the year before.

“For about the past eight years, we’ve chosen to close our business over summer which has been really successful for us to maintain enthusiasm and pick up on maintenance issues in the business. The unfortunate thing for us this year is that we reopened at the beginning of March, full of enthusiasm for a big year,” Fargher said.

“Last year was a very big year for the Flinders Ranges and outback… we had an extraordinary year last year and we were all prepared for a busy year this year. I guess the shut down has allowed us now, with all the uncertainties, to rethink how we run our business.”

The pop up Prairie on O’Connell is doing well, both attracting interest from new customers in Adelaide, and drawing from the following that already existed in the city. It’s a positive reminder of the ‘shop local’ trend continuing to grow in popularity in the wake of bushfire and coronavirus crises, showing that Australians are keen to support the industry. 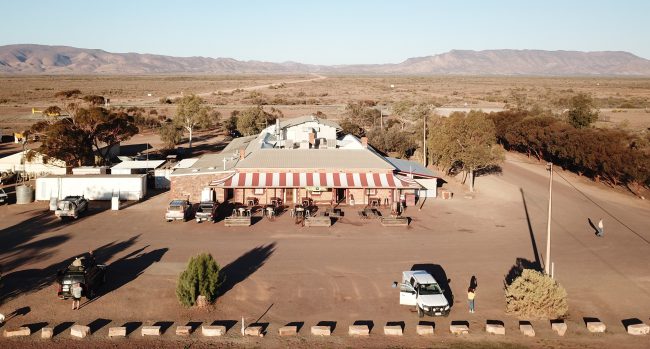 The Prairie Hotel in Parachilna