Sydney’s Universal Hotels has taken on the leasehold of a new pub operation in Bondi Junction.

Located on the site of the former Mill Hill Hotel, Universal Hotels will be taking on the pub component in a mixed residential and commercial precinct development. Construction on the new premises began on 1 June.

“We are excited about bringing the community an exceptional food, beverage and entertainment offering.”

The precinct development – named NewLife by developers TWT – will include multiple storeys of residences, as well as a ground floor commercial precinct, including the mill. HTL Property were engaged in finding the pub operator for the development, after having sold the Terminus Hotel for TWT previously.

Meanwhile, in Sydney’s north-west, Luke Ainscough has acquired the freehold going concern interest in the Fitzroy Hotel in Windsor. It is the second Hawkesbury region pub for Ainscough, who also owns the Clarendon Tavern.

Upon advice from HTL Property, existing tenant Craig Thomson agreed on a joint strategy with the BRI Ferriers (Receivers and Managers) for the freehold interest in the Fitzroy Hotel, allowing the “re-stapling” of both business and property assets; in order to be offered to the market as a freehold going concern.

The Fitzroy Hotel is situated on a 1,391sqm landholding in Windsor’s main commercial precinct, close to a Woolworths-anchored shopping centre. The hotel features a 3am liquor licence and 16 gaming machine licenses.

With an agreement struck between the two independent vendor entities and the Ainscough purchasing vehicle, HTL property’s Blake Edwards said these kind of ownership arrangements may become more common in the current market conditions.

“There currently exists a clear arbitrage opportunity in the market regarding FHGC yields and the traditional returns afforded through the OpCo/PropCo model. The respective premiums achieved by both tenant and landlord on the sell side of our Richmond transaction reflect that philosophy, and we are currently in discussions with other landlords and tenants about re-coupling their assets in order to take advantage of this most recent market paradigm.” 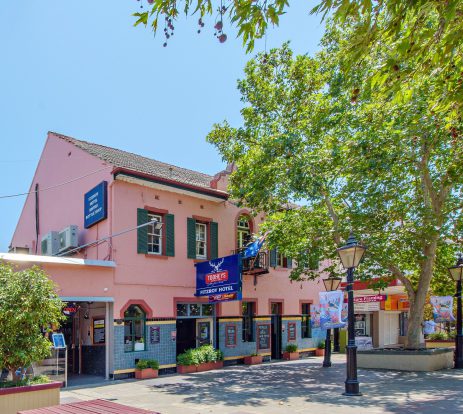