The sustainability and innovation of Aussie distillers

Bars and Clubs journalist Brydie Allen looked into why supporting local distilleries is about much more than just location.

There are around 200 distilleries in Australia right now. Thousands of people around the country are creating high quality spirits, capturing the hearts and taste buds of consumers the world over. It’s a wonderful time to be an Australian distiller.

With so many different spirits on offer, it’s clear why the ‘shop local’ ethos has been able to take off more than ever for the liquor category. At the recent Drinks Innovation Summit it was a theme that kept popping up: consumers are increasingly interested in where products come from and are seeking out local options.

The reason the Australian spirits market is flourishing right now isn’t just because the distilleries are located on the same bit of dirt we’re all standing on. It’s because their stories showcase techniques, ideas and products that are internationally recognised for their quality approaches to innovation and sustainability.

We’re home to some of the most unique native botanical blends, distinctive climate conditions and greenest distilleries on the planet, and they’re some pretty big reasons to support our local distillers.

Black Gate Distillery, located in Mendooran, was New South Wales’ first hot climate distillery. The husband and wife team behind Black Gate, Brian and Genise Hollingworth, started the distillery 10 years ago, wanting to change career paths and do something fun.

Being a small distillery, they’re easily agile and able to innovate their offering based on what the consumers are looking for.

“We try and chase what’s popular with people and what the next step is that people are after,” Brian said. “So, we went to heavily peated whisky over three years ago, I’ve been making a lot of that because it’s very popular.”

Black Gate’s distinctly hot climate means that their whisky gets a lot of cask influence. However, by being an independent and hands-on distillery, the Hollingworths can also changes elements of this, based on the whisky they want to make.

Brian said: “We’ve gone to bourbon casks because they impart less flavour into the whisky that you can show off your whisky making skills more.”

“Whatever it takes to make the best product. We’ve devoted our lives to making booze, so we may as well make the best we possibly can.” 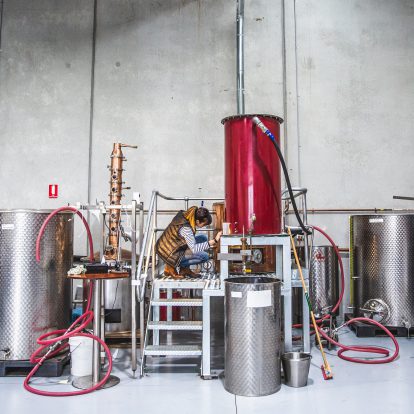 Down on the Mornington Peninsula is another innovative family operation, Bass and Flinders Distillery. Second generation distiller Holly Klintworth is now the Managing Director and Head Distiller, after being mentored by father Wayne Klintworth, the distillery’s co-founder.

Bass and Flinders techniques are inspired by the Mornington Peninsula as a winegrowing region, combined with the French distillation of Cognac. All the spirits they produce are grape based, and feature a range of locally sourced and native botanicals.

Holly told Bars & Clubs about some of the innovations coming from Bass and Flinders distillery, which all hark back to their local and international inspirations.

“We were the first Australian distillery to use native ants in gin,” Holly said, describing the Bass and Flinders Angry Ant Gin that’s made using Gravel Ants. This gin came about after hearing about Wooleen Station in Western Australia from ABC’s Australian Story program.

Bass and Flinders worked with Wooleen and Melbourne University to extract the alarm pheromone from the sustainably sourced ants. The ants are a thousands of years old native Australian food source, and the pheromone is a replicated flavouring in the USA.

This year, Bass and Flinders celebrates their 10 year anniversary with even more innovation, with Holly participating in a cross-continental collaboration to come up with a truly unique French Australian brandy blend.

“I don’t believe anyone else in the world has done this, it’s actually a blend of our brandy with some French Cognac. So it’s quite unique. Our ethos has always been traditional techniques with a new world Australian twist, so this brandy is meant to encapsulate that for us.”

Further south is another innovator, Belgrove Distillery, owned by one Peter Bignell. When starting out, Peter said he wanted to do as much as he could himself, making the distillery inherently personally innovative.

Belgrove has been a pioneer on lots of sustainable distillery practice, with one innovation being that he created peat from sheep droppings on his property, to smoke the grain and create peated whiskies. These days he’s known to distil anything that people don’t want.

“There’s quite a few of my products now made from other people’s stuff they don’t want for some reason, so I’ll get beer that could be out of date or just wasn’t quite up to spec,” Peter said.

“I’ll get cider from places that have made a batch just not quite how they want it, or else its surplus… I’ve got people who give me pallets of bread and pineapple juice and all sorts of things that I then make products from.”

Read more about the sustainable approaches of Australian distilleries like Black Gate, Belgrove and Bass and Flinders over on the Bars and Clubs website here.