Queensland-based Great Northern Brewing Co has announced its first foray into the no alcohol beverage sector with the release of Great Northern Zero.

Antonia Ciorciari from Great Northern Brewing Co said it was the growing demand for alcohol-free beer options in Queensland that pushed the company to develop Great Northern Zero, noting how the worldwide zero alcohol beer market is expected to be worth $34.4 billion worldwide by 2024.

“The non-alcoholic beer category has doubled in Australia in the past year and sales through bottle shops and other off premise sites have increased 30-fold when compared with the same period in 2017/18,” Ciorciari said.

Ciorciari notes that both men and women are seeking more non-alcoholic beer options, with strong demand coming from the 25-45 age bracket. Great Northern’s zero alcohol version is expected to be able to cater to the same consumers that drink the alcoholic products, as it stays true to the values of the brand.

“Our fans are an outdoorsy lot who want the freedom to 4WD, boat, fish, kayak, hike or simply drive home from the pub and still enjoy a cold Great Northern with their mates,” Ciorciari said.

“Now they can add a few Zeroes to the fridge or cooler, along with Great Northern Super Crisp or Original, and then anyone who wants to have a beer at any occasion now can. Zero looks like a Great Northern and has the easy-drinking taste of a Great Northern, the only thing missing is the alcohol so we’re confident it will be a hit with Queenslanders this summer.”

Like the Great Northern Super Crisp and Original products, Great Northern Zero also features a marlin on the label, and has already been given the nickname Blue Marlin.

Matt Wright, known for his passion and skills for outdoor adventure and for being the star of National Geographic’s Outback Wrangler, said he certainly sees the benefits of a zero alcohol beer.

“Be it out on the boat with the family, looking for a rogue croc on the air boat or heli fishing with the boys, you sometimes would like to snap the cap on a coldie but it’s just not an option,” Wright said.

“Great Northern Zero means I can get in on the action and still partake in a cold beer on a hot day. It’s a bloody ripper idea! What I also love is the Great Northern Zero recipes were tested and selected by Queenslanders. We know we can trust the folk from up here know a thing or two about good beer.”

Queenslanders will also be among the first to taste Great Northern Zero, with the product initially only being available in QLD and the NT, both on and off-premise in cans and bottles. 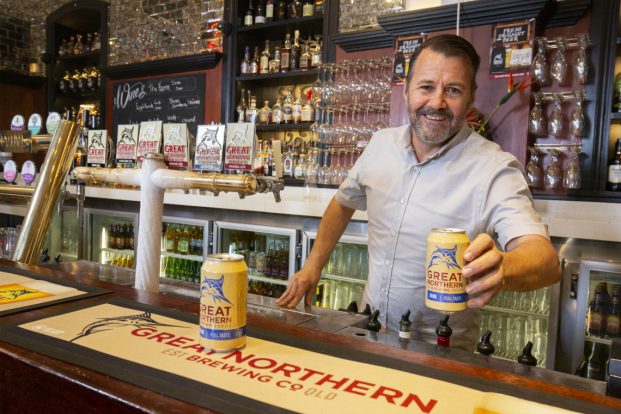