The new label has launched with four wines, each reflecting Ricky’s life and career. Using fruit from different vintages across different Australian wine regions, Riggs creates wines that connect to these moments integral to the Ponting name.

The first styles to be released by Ponting Wines include the 2020 First Session Sauvignon Blanc, 2019 Mowbray Boy Pinot Noir, 2017 The Pinnacle Shiraz and 2018 Close of Play Cabernet.

Speaking at a virtual tasting of the range, Ponting said: “What you’ll find through this range is that I tried to tell some stories about me and my background and my upbringing.”

“We were really conscious of not locking ourselves into one region because, for me, the business was one thing but I wanted to tell the story of me and my life too.”

For the Adelaide Hills Sauvignon Blanc, the story refers to the first session of a test match, which Ponting describes as “extra special,” because it was: “A chance to pull on the baggy green with ten of my mates and come together as one.”

The Mowbray Boy Pinot Noir, as well as a Chardonnay expected to be released in coming months, speaks to Ponting’s heritage in Tasmania, being the place he grew up. The local Mowbray Cricket Club was where Ponting said he learned a lot about life and cricket, and helped him become known as the Mowbray Boy.

While Ponting saw Tasmania as an important region to focus on from a storytelling perspective, Riggs also said it was key for the wines themselves, as they focused on some of the most premium grape varieties that regions were known for. Riggs said: “The essence of these wines focuses on the best of the best.”

The final two wines refer to more of Ponting’s favourite moments in cricket, that is, the Pinnacle of a cricketer’s career at the Ashes, and the Close of Play where teammates raise a glass together after the game is done and the crowds are gone. The Pinnacle Shiraz hails from McLaren Vale, while the Close of Play Cabernet is from Langhorne Creek.

While the Ponting influence is evident in the name and story, it’s also important to note Ricky and Rianna’s input to the what’s inside the bottle too.

“It’s not ever been about us just sticking a label with our name on a bottle and then walking away… we put the name on the bottle because we are wholly and solely involved and invested into making it the best it possibly can be,” Ricky said.

Rianna added: “This is an ongoing thing for us – we never just thought we would launch this year and that was that… we want this to be our legacy. We’d love our children to learn more about it when they get to a certain age, we don’t see it ending anytime soon.”

Riggs also noted that although ‘celebrity’ drinks brands have sometimes had poor reputations in the past, Ponting Wines is not the same, and that came down to Ricky and Rianna’s high involvement in every area of its production.

When they started out with approaching retailers, Riggs said: “it was ‘oh, celebrity brands, we’re not interested… And now they’re actually seeing the wine is serious, packaging is serious, Ricky is serious, Rianna has a passion for it and already in a short period of time, people realise that it’s not just a celebrity brand.”

The Ponting Wines range, as well as being available direct to consumer, is largely targeting independent retailers. It’s now available through ALM in QLD, NSW, ACT and Tas, and expanding into SA and WA soon. 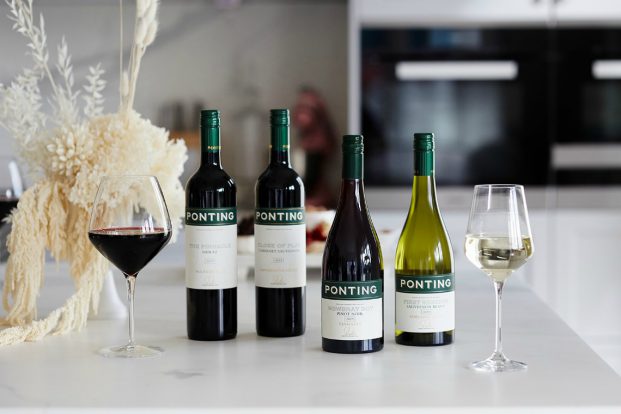