A limited edition, criminally good beer sets sail down under

19 Crimes, the rebellious brand that continues to dominate the global wine market thanks to its distinctive packaging, unique marketing campaigns and augmented reality ‘talking’ wine labels, has launched a beer.

Currently a limited edition, targeted at millennial craft beer drinkers who are on the lookout for something new, this soft-bodied Pale Ale features 19 Crimes’ bold and unique packaging, complete with its famous mug shot AR experience.

Named after 18th and 19th century British rogues sentenced to live in Australia as punishment because they were found guilty of at least one of 19 Crimes, the brand celebrates the rules they broke and the culture they built. 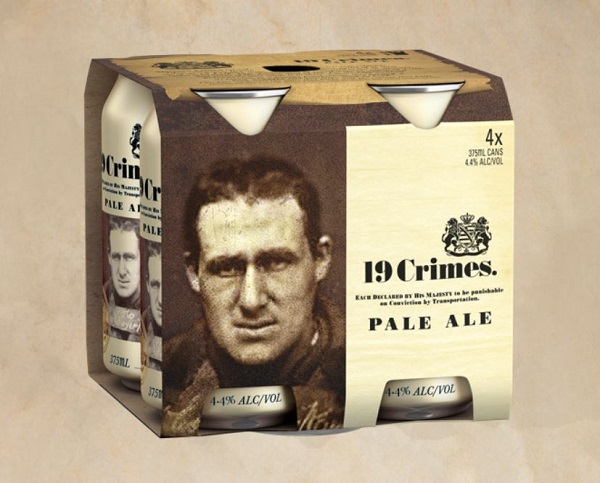 Today 19 Crimes – a $36m brand in Australia – is the #1 contributor to growth in the wine market and is the #1 contributor to Chardonnay and Shiraz growth! It was put on the map thanks to its great tasting, no-nonsense wine and world first AR talking wine label, which brings to life the rich and colourful stories of the convicts turned colonists who feature on the brand’s labels.

Joining an already criminally good line-up, the 19 Crimes Pale Ale will launch this month throughout Cellarbrations, The Bottle-O, IGA Liquor and Ritchies liquor outlets, along with select on-premise and Independent retailers. It is available in Australia until stocks last.

19 Crimes first set sail in Canada in 2011, was launched in the USA in 2012, followed by Australia in 2014.  The brand has continued to dominate for Treasury Wine Estates over the past few years, with sales soaring past 1.6 million cases.