When the Tingha Plateau bushfire ripped through the Northern Tablelands of New South Wales almost exactly a year ago, it was reported to have burnt through more than 23,400 hectares of land.

And as it burned out of control by the New England wine region, one of its embers fell into the vineyard at Topper’s Mountain Wines, causing a huge grass fire which burnt up to 90 per cent of the vines. This happened just hours before they were due to harvest, and the 2019 vintage was lost.

Wine Manager at Topper’s Mountain Wines, Jan Taborsky, said the fire destroyed 15 per cent of the vineyard, a number which took them five months to calculate.

Taborksy said this was for several reasons: “One would be that the spread of the dead vines was quite uneven. Basically those dead vines were scattered all around the vineyard, they’re not just on the one block.

“The second thing is that some vines actually recovered, even though they didn’t look like they would.”

Throughout the devastation of the fire, it was little moments like this that kept Topper’s Mountain Wines hopeful for the future. Looking back to just a year ago, after the recent losses in other Australian wine regions, their story is an inspiring example of the potential when communities come together to support each other.

Since the fire, Topper’s Mountain has been undergoing a resurrection. In the months immediately after the fire, they focussed on infrastructure restoration, like irrigation systems and posts for example, and monitoring which vines were showing signs of life.

Along the way, customers, industry and the local community were asking how they could help, and while the original message was to buy the wines, they soon came up with another unique way that people could get involved with the recovery effort.

As they encountered the huge cost of replanting 3,000 dead vines with new seedlings, Topper’s Mountain established the My Vine Club, giving people the opportunity to adopt a baby vine for a one-off cost.

Club members pay $300 to become a parent to a baby vine of either the Gewürztraminer, Petit Manseng, Nebbiolo, Tannat or Tempranillo grape varieties, and are taken on the journey of recovery with Topper’s Mountain. Parents name their vines, are updated twice a year on growth progress and receive a special certificate with the vine’s specific address where they can go and visit it in the vineyard.

On top of this, Topper’s will hold a My Vine event each year for parents to celebrate the milestones in their baby vine’s life. Club members also have the opportunity to buy wine of the same variety as their baby for a special price.

Taborksy said the support is invaluable: “Financially it was a very tough year because some of the infrastructure was covered by insurance but the crop wasn’t, and we lost all the crop from 2019. The vines weren’t insured as well so the financial impact was quite serious.

“On the other hand, we experienced fantastic support… we thought, well, we are planting new vines and we can see that people are engaged and support us in what we do, so we wanted to give them a chance to be a part of it through this initiative.”

So far 60 of the 3,000 available baby vines have been adopted, which Taborsky said is already a great result for them.

“[It was] satisfying that people got engaged with that initiative that was not only about money to support a baby vine’s growth.

“Each of the new parents must give the vine a name, and there are many great stories… there was a guy who visited the vineyard 10 years ago with his mum who passed away in the meantime so he named his vine after his mum.”

While the baby vines are still learning to grow grapes, the 2020 vintage looms. Taborsky said it will be much less than usual, but that’s not just a result of the fire.

“It’s hard to tell at the moment but I think we will be definitely 50 per cent below what is our standard vintage, compared to 2016, 17 or 18. So it will be a tough vintage for us,” he said.

Since National Liquor News spoke to Taborsky, the Topper’s Mountain Wines social media pages show they’ve received significant rainfall to fill their dam. Although it caused soil erosion, the posts again remain focussed on the positives of the situation.

While their loss is still quite fresh, Taborsky’s message to others in the industry that have been affected this fire season is inspiring: “Don’t give up, don’t give in, and don’t look back.”

Adopt your own vine or learn more about the My Vine movement here. 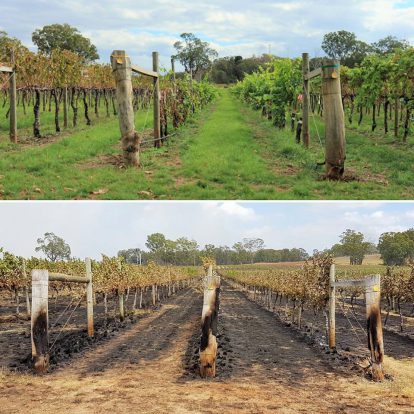 Before and after the fire in the Topper’s Mountain vineyard.