ILG: “We’re ahead of the game”

The Independent Liquor Group (ILG) is experiencing growth in every category of its business, with an improvement in net assets sitting at $18.7m that puts ILG in a strong position for future growth.

Opening the business sessions of the 2018 ILG Conference in Singapore and Bangkok, CEO Paul Esposito told delegates “we’re ahead of the game”.

“Every category in our business has good growth. There are some areas that still need improvement but we’re ahead of the game. We all know that in business cash flow can be an issue, however ILG is in a positive cash flow position, giving us the flexibility to be able to do some exciting things.”

This time last year ILG reported net assets of $16.8m and this year that balance has risen to $18.7m.

Esposito talked delegates through ILG’s performance, with sales revenue in growth of 13 per cent versus last year. He also said that the Townsville warehouse is now fully owned by the Cooperative. Excess space in Townsville will be leased and will further improve Townsville’s profitability. “My focus over the last 12 months was also to reduce inventory holdings and we’ve successfully reduced this number by 23 per cent, resulting in more efficient practices and improved cash flow.”

As for ILG’s banner groups, Super Cellars and Bottler Banners are up 13 per cent in value and nine per cent in volume versus a year ago. Esposito told delegates that the reason the value is outgrowing volume is based on the impact of the Container Deposit Scheme (CDS) in NSW and the mix of business shifting to higher value products. 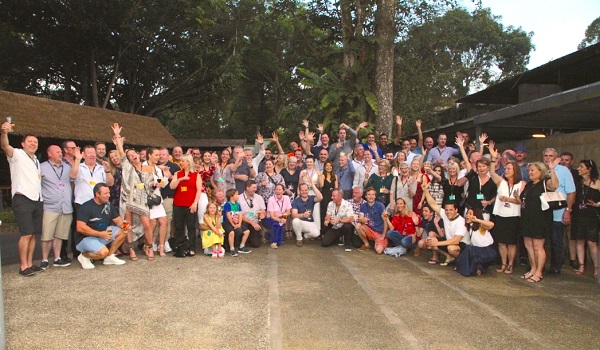 The ILG Study Tour Group headed to Singapore and Bangkok

As for moving forward, ILG has some pretty exciting things on the horizon, including a move into retail in Victoria, a concept store in NSW and the launch of a new premium banner.

“Once a year the Executive and Board members of ILG get together to plan what ILG should look at in the next three or four years. Last year we set ourselves an ambitious target, to turn over a half billion dollars in shed sales by 2022, so that is our aspirational target,” Esposito said.

To reach that target ILG will be launching a new premium retail banner.  The approval process is currently in place for the name to be registered and ILG hopes to have a couple of stores branded with the new banner by November 2018, and a focus on premium products in every category. “We need to be playing at that top end,” he continued.

Another area of focus Esposito spoke about was increasing ILG’s membership base by five per cent year on year.

Esposito also provided an update on the implementation of a new ERP system, which he said is near completion. “We’re in the final stages but it’s a huge investment and we need to make sure it’s a collaborative Executive and Board decision, and that we get it right. I’ve seen some companies over the years invest a lot of money into ERP systems only to fall down at the last minute.

“We’re down to two providers and we’re at the final decision now. It’s going to be about a $3m investment over 10 years. The long-term plan is to provide better efficiencies internally and at membership level, with better response times.

“Behind every decision we make here at ILG, be that moving into the Victorian market place, a new concept store or implementing an ERP system is based on adding value to our membership.”