When Michael David got his first liquor licence, things were a lot different to how they are now.

The day was February 14, 1966 and it was a time when you could only hold a two gallon liquor licence, when the world wasn’t in our pockets on our smart phones and, surprisingly, when David himself didn’t drink or know much about alcohol in general. It was also Australia’s decimal day, when the country officially introduced decimal notes and coins, which marked the end of British-style currency.

To get a taste of what that first store experience was like back then, David notes how fellow industry heavyweight Len Evans used to describe him when the pair were at events: “He would say, ‘when this man bought his first shop, he didn’t know the difference between red and white wine.”

David said he originally kept a little book in his back pocket, and would refer to it when customers would ask him for specific wines. If a customer came in that knew a lot about wine, he’d make note and as such, built his knowledge as he went.

David’s first store, pictured below, was in Oxford Street and would be followed by multiple others in various locations and capacities across Sydney, including Elizabeth Bay Cellars, which this year celebrates 35 years. The header picture of this article is at this store, when it was celebrating 30 years. 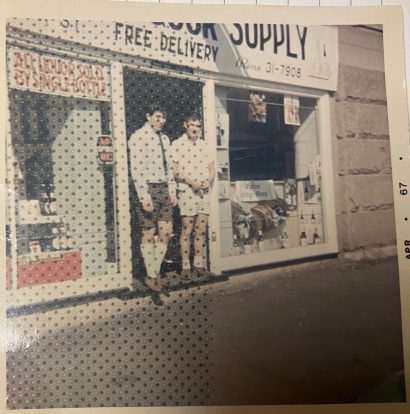 Michael David and his brother at the first store

Throughout all of the years, all of the stores and all of the locations, David said that same mentality of always listening and learning has served him well, right from his roots in the grocery sector.

“There were virtually no liquor stores at the time, most of the alcohol was sold through pubs… and I always would say that we [the grocery business] should get into liquor,” David said.

“I learned things, for example, we read from left to right on the shelf and if you don’t know what you’re going to buy you start with the cheapest and work your way up… and I’ve tried to follow things that I’ve seen, as much as my memory would let me.

“Listen to what other people have to say. Nobody has all the knowledge, not the President, the Prime Minister, the King or the Queen.”

David said through this strategy, he also forged connections within the industry that would ultimately be the reason that he’s stayed in the business for 55 years. He specifically called out the work of the Liquor Stores Association, as well as co-operative and banner groups.

“It’s different today, but we [the Liquor Stores Association] used to meet once a month. And then things like ILG started, which was a very, very good thing for the industry. With their education programs and their trips away where you learned what was happening in the world,” David said.

Of these learnings, he said there is one that sticks out as the most important: “The most important person in the shop is the customer, and they come first, second and third.”

He describes how all the knowledge in the world won’t be valuable if a retailer doesn’t understand this one point, and that the smartest businesses are the ones that truly value this, right down to the smallest detail.

“We know most of our customer’s names, we know their dog’s names, and we always have a water dish out the front and ice on the hot days. They drag the people in, the dog’s in charge,” David said (and following the interview at Elizabeth Bay Cellars, we watched a dog do just that).

“You have to see that it’s the little things, not the big things, but the little things. Give the customer what they want not what you want, because all the knowledge in the world is not as important as selling most of your products.”

Reflecting on the 55 year milestone and the multitude of experiences in the industry he’s had in that time, David said that its “tiring” to reach such a point, which makes sense considering how he describes getting just five hours of sleep every night and the day before started work at 4:30am.

But it’s also something that he wants to continue doing, not only to just have something to do, but because of his strong connection to the industry and all it holds.

Keep an eye out for more insights from our interview with Michael David in an upcoming issue of National Liquor News.

SUBSCRIBE TO NATIONAL LIQUOR NEWS DIGITAL MAGAZINE
Related Stories
One billion litres of European wine could be lost
What will retail look like beyond the pandemic?
Retailers adapt to changing shopper behaviour
A big win for the independents