Peter Lehmann has announced the release of the super-premium Masterson Shiraz 2015, made in honour of the winery’s founder, Peter Lehmann, and in celebration of its 40th anniversary.

When John Casella acquired the Peter Lehmann winery in 2014 he set his winemaking team the challenge of crafting the most exceptional example of Barossa Shiraz, which would ultimately be named after Peter Lehmann’s original winery, Masterson.

Masterson will only be released in exceptional vintages, sourced from the best single vineyard fruit available to Peter Lehmann.

With 2015 presenting an excellent vintage, the team sought out and ultimately discovered a pristine parcel from a small block on the Hammerling vineyard, located in the Moppa district in the Barossa’s North-West.

Glen Hammerling has been a grower for Peter Lehmann since the early 1980s, and is incredibly proud to be the first grower to contribute to Masterson Shiraz, an accomplishment he will always treasure.

In honour of Peter Lehmann, the team selected a foudre barrel for maturation, which is something the he had experimented with in his early winemaking career.

Chief Winemaker Nigel Westblade explains; “This large format barrel beautifully preserves the vineyard character and as the philosophy for Masterson is a pure expression of a single vineyard and vintage, we decided extended maturation in a foudre would achieve our ambition. The surface area to volume ratio of a foudre is much lower than with smaller format barrels, which has allowed the wine to breathe, soften and integrate slowly over time. A further 12 months of bottle maturation has resulted in a perfectly rounded, complete wine”.

John Casella says that the philosophy behind Masterson was to not just make a bold statement for Peter Lehmann, but also to lift up the Barossa as a premier wine region.

“We’re proud to make a statement for Australian wine with the release of Masterson; to demonstrate that both Peter Lehmann and the Barossa are capable of producing wines that rival the icon and luxury wines of other premier regions around the world. I believe that we will stand here in another 40 years’ time knowing that we have created a wine that will leave a remarkable legacy, just like Peter Lehmann himself.”

The Masterson Shiraz 2015 will be available in Australia from 20th November, exactly 40 years after the foundation stone of The Weighbridge was laid by Barossa grape grower Albert Schmidt and Peter Lehmann at the originally named Masterson winery. 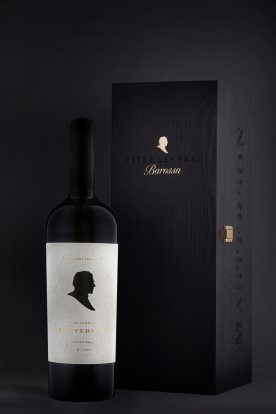