The first ever IBA Hall of Fame inductee announced

Grace was inducted in a presentation at a farewell gala dinner marking the end of the IBA Trade Workshop for 2019.

Introducing the inaugural award, ALM CEO Chris Baddock explained the judging was carried out by two long serving retailers as well as Metcash’s Scott Marshall, former CEO of ALM for over four years. Baddock said it was the perfect time for the award to be opened as he explained the criteria.

“It’s a great way to celebrate the people that are in our stores. The people who help our stores week in, week out, year in, year out, decade in and decade out. Every state submitted a Hall of Fame nominee and the quality of these nominees were remarkable,” he said.

“The award has been judged over three major criteria: support of IBA, community support and contribution to the broader liquor industry. I’d like to give a warm welcome to Vicki to tell you about the Hall of Fame inductee.”

Vicki is one of Anita Grace’s sisters, and took to the microphone to describe Grace’s history in the community and her career.

From a first taste of the industry through her future father-in-law’s Kalgoorlie pub, Grace eventually found herself in Newman, a town in the Pilbara region of Western Australia. She first owned a newsagency before buying the local liquor store over 20 years ago, becoming part of the IBA network shortly after.

The presentation also featured a video interview with Grace, talking about the work she has done in the Newman community and setting up a women’s refuge shelter with another local mother. Since its opening, the centre has helped over 3000 women safely get back on their feet after experiencing domestic violence.

Vicki then introduced a segment of pre-recorded messages of congratulations and support, including well wishing from Grace’s daughter Katie, local Newman community elders and those who have worked with Grace in the industry.

CEO of Liquor Stores Association of Western Australia, Peter Peck, said in his message that “if anyone deserves an award like this, its you.”

“When it comes to this industry, you are the Joan of Ark. You are that person who has no fear… I don’t know how you do it, but my god you deserve this and bloody well done,” Peck’s message said.

With a standing ovation from the crowd, Grace joined Vicki and Baddock on stage with other sister Marina, General Manager of ALM Linda Boswell and Metcash CEO Jeff Adams.

Grace’s acceptance speech (pictured below) referenced the struggles and wins in her career, as well as her love of the industry as a whole.

“When I first started, I was probably doing something naïve, working in the liquor industry. I can remember one of the reps saying to me, ‘you’re a woman in a man’s world, you’re not going to survive.’ Well I’m still here,” Grace said.

“I can say now, the strong women that we have in this industry, it’s no longer a man’s world. Not taking anything off the men of course, but our women in this industry show the men how its done.”

“I love this industry. I’m extremely proud, extremely honoured to be part of it.”

Before finishing her speech, Grace commended the next generation in the industry.

“We must be proud of our young people coming up. Talking to some of the young people that are following in our footsteps now, they’re heavily embracing the new technology. These are our future and we need to encourage and embrace this and make them a strong part of our industry and invest in them,” she said. 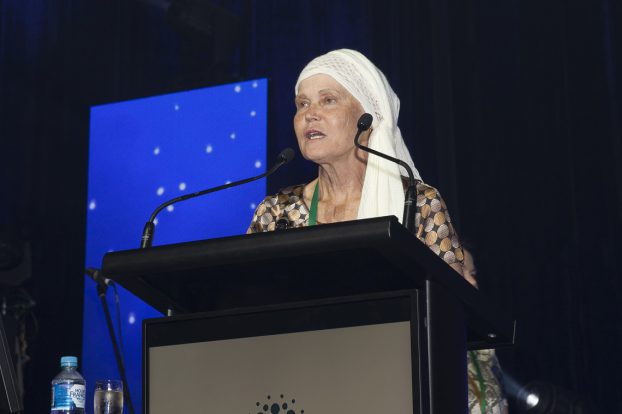