Wine exports positive but pandemic impacts yet to come

Although the value of Australian wine exports continued to grow in the 12 months to 31 March 2020, the full impact of the COVID-19 pandemic is yet to be felt.

Wine Australia has reported that positive figures of the past year do not mean that the pandemic has not affected exports, but it is too early to tell just what this impact will be. In the meantime, it’s important to analyse the results that are available, and what that means for Australian wine across the world.

The figures from Wine Australia indicate total export value has increased by three per cent to $2.87 billion, with a record average value for bottled exports of $7.12 per litre. Over the same period, total export volume declined by 11 per cent to 728 million litres.

This volume decline was a result of less wine available from lower vintages in 2018 and 2019, a trend likely to continue with a smaller yield in 2020 as well. Increased value, however, is in line with previous reports from Wine Australia about premium exports soaring.

Further positive figures show the average value of Australia’s unpackaged wine exports increased by five per cent to $1.26 per litre, a level not seen since 2005. Wine Australia says this reflects a continued demand for Australian wine in an increasingly competitive bulk wine market, flowing through to increased returns for grape growers in the inland regions of the Riverland, Murray Valley and Riverina.

Wine Australia’s CEO Andreas Clark said the nature of the export industry, and the fact that the pandemic was evolving daily in major markets like the UK and USA, meant that it was too early to get an accurate picture of how COVID-19 will affect Australia’s wine exports.

However, he did note that the first quarter of 2020 had a significantly steeper slowdown than that of previous years, thanks largely to declines in China during their peak battle with the virus.

“It is too early to tell what the effect of the subsequent world-wide spread of the virus has had, and will have, on exports to other destinations.

“Sales data from the UK and USA suggests that while cafes and restaurants have closed and sales have been lost, it’s been offset by people buying more wine for at home consumption.”

Clark also referred to data from IRI Worldwide which notes that wine sales in grocery and mass merchandisers in the USA grew by 52 per cent in the week ending 21 March.

“There are reports that Australian wine is keeping its share amidst this growth in both the off-trade and online. We will have to see how things go when stockpiling calms down,” Clark said.

“The UK and Australia went through similar surges and then calmed down. It remains to be seen if wine sales through off-licence and online balance out the decline in on-premise sales.”

Another upside noted by Wine Australia is that Australia remains well positioned in China long term, despite a disappointing start to the year. According to import figures from Global Trade Atlas, total wine imports to China decreased by 17 per cent in value and 14 per cent in volume, for the year ending February 2020. But Australia’s bottled imports increased by 11 per cent in value – the only source country not to experience a decline in bottled wine value.

On a global scale, Australian exporters have shipped to 119 destinations in the past 12 months, with Northeast and Southeast Asia continuing to be the source of growth for Australian exports.

The top five destinations by value were:

The top five destinations by volume were: 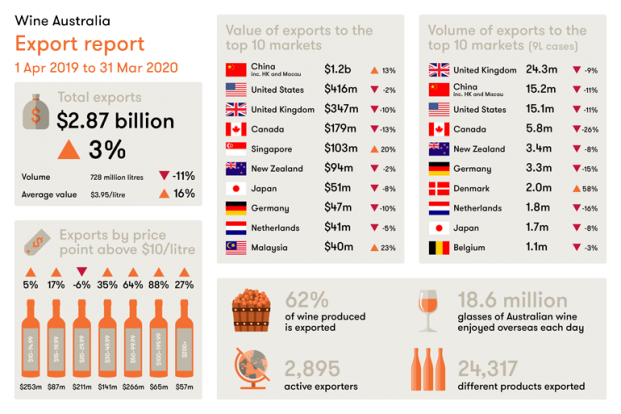 There are 5 ways you can catch up with National Liquor News?