Staves Brewery in Glebe took the prize for Champion Draught Beer at the Royal Agricultural Society of NSW’s Sydney Royal Beer and Cider Show with its Pale Ale.

In a record-breaking competition for Sydney Royal, Staves Pale Ale overcame 85 other draught beer entries across 15 classes to claim the top award. Steve Drissell, owner and founder of Staves Brewery, told Beer & Brewer that the win was “amazing”.

“We’re such a small brewery and against so much competition, 300 beers in there and lots of gold medals and so on, it’s a quite an achievement for a little brewery that very manual,” he told Beer & Brewer. “We’ve been brewing a pale ale since we opened, but we’ve always been tweaking it to see how we can improve it or make it more interesting.

“We’ve changed the hops around a couple of times. We’re now dry hopping it with a lot more Citra and Galaxy than we used to. We’ve still got some Centennial and Chinook in there as well. We kept experimenting with it until Zac (Pauling, the head brewer) was happy with it.

“It’s for anybody who helped me get to where I am today,” Zac Pauling. “Anybody was has leant me raw materials or given me yeast when I forgot to order it, anybody who has just given me a little bit of education, thank you.”

This year’s awards was the first time all Championships have been awarded – including all cider and perry classes. In total, 43 beers claimed Gold medals – the most in the competition’s history – 75 received Silver medals and 79 picked up Bronze medals. Pale Ale was the biggest category

Adelaide Hill’s The Hills Cider Company was crowned Champion Cider for its Apple Cider, Napoleone Pear Cider from the Yarra Valley scored Champion Perry, while the Champion Bottle Conditioned Perry or Cider went to Small Acres Cyder from the Central West New South Wales for its 2015 The Cat’s Pyjamas.

“This year’s competition is a true reflection of the current strength of the Australian beer and cider industry and our ability to keep on evolving,” says Samara Fuss, head brewer at Philter and chair of judges. “Being a brewer and being in the industry a long time, I was thrilled to hear all of our judges commenting on the quality of the products entered and the improvement across the board.

“It was a very hard competition and the winners here today really battled it out. Thank you for putting your best foot forward and I congratulate all producers who continue to learn, experiment and refine our craft to deliver high-quality beers and ciders.”

It was also a good result for Australian Brewery (team pictured below), who celebrated 12 months of being part of the Redcape Hotel Group by winning a gold medal for Seis Hermanos Lager and four other silver medals and a bronze.

Sales and Marketing Manager, David Ward told TheShout: “It has been awesome for our locals in the Hills to see our beers recognised in a national competition. This fits in really with our renewed focus on turning the Australian Brewery into a destination Brew pub for North West Sydney. It is also great timing to celebrate 12 months as part of Redcape Hotel Group.” 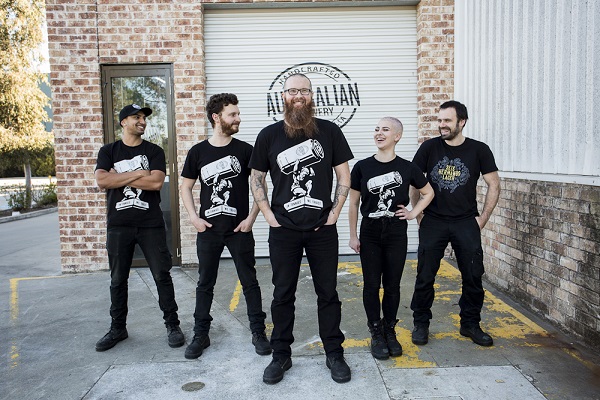