This is the second time in three years that Dainton has won the top trophy at The Independent Beer Awards, affectionately known as ‘The Indies.’

Speaking to Beer and Brewer on the win, brewery Co-Founder Dan Dainton said: “I can’t explain. It’s really exciting to win it up against some amazing breweries.”

“I feel a little bit lucky. I don’t use luck lightly as a term, because we work our arse off. One of the things we say every day when we come to the brewery is ‘we are trying to make the best possible beer we can.’ I think we’ve shown that we’re up to the challenge.”

The Indies mark the end of BrewCon, an annual conference and trade expo for Australia’s independent brewing community, which took place this year at Melbourne Convention and Exhibition Centre from 3-6 September.

A judging panel comprised of respected national and international beer professionals assessed over a thousand entries to recognise the best beers and breweries across the nation.

The other beers that took out prizes on the night were:

For breweries, the Champion Large Brewery trophy went to Fixation Brewing Co, of Melbourne. Commenting on their win on Facebook, the company said: “Are you kidding me! What an honour. Thanks for everyone’s support.”

The Small/Medium Brewery Champion for 2019 was 3 Ravens from Thornbury, Victoria.

This year’s Indies saw the creation of several new trophies that reflect the growth and change in the independent brewing sector. One of these were the Champion Australian Brewpub (to recognise the industry contribution of breweries that sell at least 75 per cent of their beers on-site), which was won by All Hands Brewing House from Sydney.

Also added this year were individual awards for State and Territory Champion Breweries (to recognise the best brewery in the uniquely different brewing communities that exist across the country).

The state and territory champions were:

Each year, the Indies also provide awards to individuals who exceed community expectations in their support, development and promotion of Australia independent beer.

This year’s industry nominated winners were:

Now in it’s seventh year, BrewCon and the Indies are presented by the Independent Brewers Association (IBA).

2019 was an extra special year for the Indies, with two proposals taking place on the night. IBA described the first one on their Instagram, between long term BrewCon event volunteers Locky Miller and Jess Clark.

“Drop everything! We’ve had our first ever INDIES PROPOSAL live onstage! @lockycrows9 got down on one knee to ask the beautiful @jazzyjesster to marry him!

“They hold a special place in our hearts. They fly over every year, paying their own way, from Adelaide to volunteer at BrewCon,” the post read.

Later in the night, Dan Dainton got down on one knee to propose to girlfriend Jess Scanlon on stage while accepting the night’s top trophy (pictured below). Dainton told Beer and Brewer he didn’t even have a ring, but couldn’t miss the opportunity.

“I said if we win another trophy, after winning the first one, I’m proposing, just be prepared. She laughed but I’m a man of my word,” Dainton said.

“If you’re listening out there, and you’re a consumer of beers buy some more Dainton beers because I have to buy my fiancée a ring!” 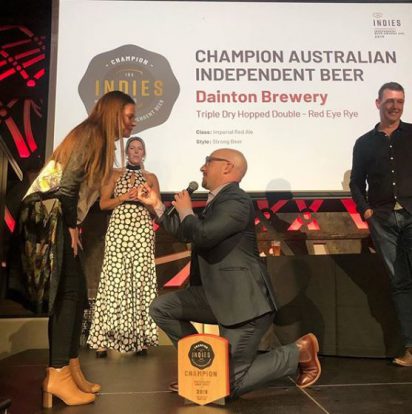