Liquor Barons has announced the launch of their new ‘Legit Locals’ campaign, a marketing campaign which showcases the group’s local presence in Western Australia.

Speaking about the launch, Liquor Barons General Manager Chris O’Brien noted the time, effort and investment the group has taken to make the campaign a success and reflect the values of the Liquor Barons brand.

“We’re spending more than half a million dollars over the summer on this clever, fully integrated campaign. This is a significant amount of money and very much in line with our strategy to maintain Liquor Barons as the strongest retail liquor brand in the state,” O’Brien said.

“Our planning and execution of this year’s marketing activities have come to fruition with the focus on amplifying our unique selling proposition; we’re a West Aussie liquor co-operative of family-owned, independent, small businesses— and we truly are Legit Locals.”

The campaign features 25 different ‘legit locals’, as well as two dogs, a python, an owl and the Liquor Barons unique brand mascot, The General.

An example from the Legit Locals campaign

O’Brien described how they chose the talent for the campaign, noting a competition they ran across social media in line with the launch of Liquor Barons’ new loyalty program, the Barons Locals Club. The competition tasked people to capture the essence of life in WA in a single picture.

“We had a huge response and shortlisted winners from the social media competition. We added a few ‘Perthanalities,’ and a couple of store owners, along with our local winners, and got them into hair and make-up for a photoshoot and interviews,” O’Brien said.

“Our Legit Locals now have their faces splashed across more than 70 billboards, adshells, printed marketing materials and digital executions, as part of a holistic approach to our marketing efforts.”

The campaign has garnered a great response so far, with people excited to see themselves and the personalities they know from their communities in the material. O’Brien said this is what the Legit Locals campaign was intended to do, noting how it will be built upon in future as well.

“We’ve been running big out of home campaigns for the last four years featuring our unique brand mascot – The General. This year he appears alongside genuine locals and our in-house marketing team had enormous fun on creative for Legit Locals and executing the project,” O’Brien said.

“Our marketing team continues to have great success engaging the WA community and reiterating our status as the only exclusively West Aussie banner group in the industry. I’ve been particularly impressed with the level of reach and engagement we have achieved through our social channels on this campaign. We’ve got more exciting phases to come over the next 12 months.” 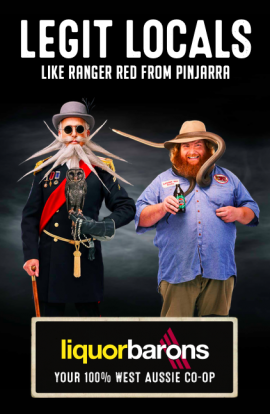 An example of another format in the Legit Locals campaign