The Australian Liquor Stores Association (ALSA) and IRI 2018 State of the Industry Report, has detailed another year of value and volume growth for the spirits category.

The dollar growth of the category has been consistent over the last few years, having been at around three to four per cent for at least three consecutive years, according to the report.

In 2017 the dollar growth of the spirits category was 3.4 per cent, which was slightly down on the 3.7 per cent of growth the category saw in 2016, but this still amounted to $119m in additional revenue. This additional growth brings the total value of the category to $3.7bn, up from $3.5bn in 2016.

In terms of volume the ALSA-IRI report highlights 1.7 per cent growth in 2017, which again is slightly down on last year, with 2016 seeing two per cent growth.

The report explains which sectors have helped to maintain the strong performance in the spirits category, saying: “Consistency of performance owes to ongoing double-digit gains in malt Scotch, gin, Irish whiskey and spiced rum.

“The same goes for robust single-digit growth in vodka and Canadian whisky.”

The double-digit gains of gin are highlighted in the report, which states that for the third consecutive year light spirits outgrew dark spirits at 6.6 per cent and two per cent respectively.

In explaining this, the report says: “Light spirits amounted to 27 per cent dollar share but more than half of all dollar growth (+$62m).

“Gin and vodka accounted for 47 per cent of all glass spirits growth in 2017, with gin seeing a 17.4 per cent year-on-year dollar uplift. Gin’s worldwide resurgence is being propelled by an explosion of boutique offerings produced with local (alternative) botanicals.” 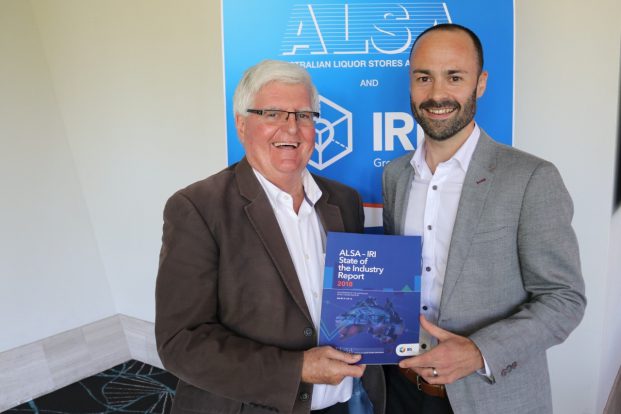 ALSA CEO Terry Mott and IRi Channel Development Director, David Shukri at the launch of the 2018 State of the Industry Report

The report also delves deeper into the spirits category, detailing that while the top five selling glass spirits brands generate 26 per cent of all the category’s value, four of those top five declined for the second successive year.

The report said: “These established brands are challenged by a new generation of explorative drinkers who are more actively seeking out artisanal/craft expressions.”

The ALSA-IRI report specifies what has been happening in Australia’s off-premise industry over the last 12 months highlighting the value of the market, the jobs the industry supports, the number of packaged liquor licences and the taxes that the industry generates.

According to the report the annual retail liquor sales in Australia total $17.5bn, which generates indirect Commonwealth alcohol excise and WET taxes of $6.2bn, before GST revenue, company taxes and personal income taxes and before State and Territory Payroll Tax or Liquor Licence fees.

The report also details more brand-specific activity and detail regarding the spirits category and the other key industry drinks categories.