The Art of Patrón Precinct opens in Sydney

The Art of Patrón Precinct in Sydney has this week been opened, starting with the launch of a pop-up bar at the Museum of Contemporary Art Australia (MCA).

The Patrón Pop Up at the MCA is described as a living masterpiece, with the activation including unique art installations, signature cocktails, DJ sets and interactive performances. The pop-up, along with the other three bars in the precinct, are designed to showcase the ethos of the Patrón brand and all the ways the tequila can be enjoyed.

“Patrón Tequila represents the seamless balance between craftmanship and refinement,” he said. “The Patrón Pop Up is the first of its kind in Australia and will bring to life unique experiences, transporting consumers to a journey of tequila making perfection from unaged icons such as Patrón Silver to aged expressions rested in French, Hungarian and American oak such as Patrón Reposado and Patrón Añejo.”

Guests to the pop-up can experience this journey via a virtual reality headset, following the symbolic Patrón bee from the agave cultivation, right through to the tequila bottling. Potted agave plants around the bar give a real life example of the process, alongside snacks inspired by Patrón’s Mexican home.

To showcase the art side of the activation, Patrón became a proud supporting exhibition partner of the Sydney International Art Series 2019-2020, presenting a major retrospective of British artist Cornelia Parker OBE from 8 November. Parker is known for transforming everyday objects in unexpected and surprising ways, an idea that inspired the art installations inside the pop-up bar.

MCA Director, Elizabeth Ann Macgregor OBE, said: “We are delighted to be partnering with Patrón Tequila for our annual pop-up bar, enhancing night-time offerings in Circular Quay for the summer months. After experiencing the mesmerising installations of Cornelia Parker, visitors can enjoy the experiential Patrón Pop Up bar.”

On now until mid-February, the Patrón Pop Up at the MCA is joined by three nearby bars to form The Art of Patrón Precinct. All within a ten minute walk, the precinct includes The Argyle, Quay Bar and Bar Patrón, each serving up unique specialty cocktails. Visitors who purchase a Patrón cocktail in each bar receive a complimentary handcrafted Patrón cocktail mug, and go into the draw to win a $2000 dining experience. 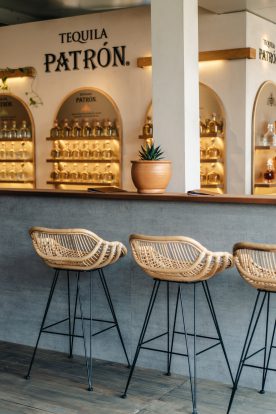