The last boxes of VB Tea up for auction

After selling out within 24 hours of the original release, the team at Victoria Bitter have found the last remaining boxes of VB Tea.

The final 11 boxes form the Last XI range, a partnership with the Steve Waugh Foundation, and are being auctioned off on eBay to the highest bidder. All proceeds will go to the Foundation to help Australians battling rare diseases.

Winning bidders will take home a box of the VB Tea as well as a VB branded tea pint, VB branded biscuits and a copy of Steve Waugh’s autobiography ‘The Meaning of Life’. All tea boxes are signed and numbered by Waugh, with the kits also containing a personalised thank you letter from the cricket legend.

Waugh said that partnering with the Victoria Bitter for such a cause was: “a wonderful opportunity for the Foundation as we continue to raise vital funds for the one in ten Australians affected by a rare disease.”

“While Aussies are cheering on Australia, they can also show their support and get a great piece of memorabilia in the process.”

Victoria Bitter Marketing Director Chris Maxwell said the team scoured the office and suppliers to find the last boxes, to make a positive impact on the community in a quintessentially Australian way.

“We were blown away by the response to VB Tea, and when we found the final boxes we knew we had to do something meaningful with them,” Maxwell said.

“There were a lot of cricket fans out there eager to ditch the English Breakfast and brew a true-blue Aussie cuppa, so we’re putting the tea towards a good cause and raising much needed funds for Australians battling rare diseases.”

Originally developed to celebrate the Ashes cricket series in July of this year, the limited edition tea was developed using VB’s Super Pride hops and black tea leaves and has zero alcohol.

Bidding has started on all boxes on the Victoria Bitter eBay page here with one kit already reaching $425.

The auction wraps up on 18 September, meaning there’s just one day left for VB fans to have a shot at getting their hands on the tea. 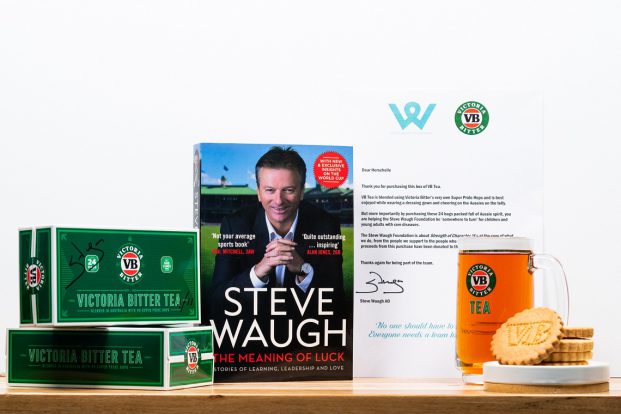