Why people are putting out their aprons

In the wake of the economic turmoil caused by the COVID-19 pandemic, the Australian Government announced several stimulus measures intended to support businesses and individuals.

Although these measures are said to be helping up to six million Australians, they exclude many workers across the nation, particularly visa holders and casuals, which make up a large proportion of our hospitality industry.

Some numbers estimate that over a million workers will be unable to access Government safety net schemes in their current form, and there have been multiple movements started to support these excluded people and lobby for change.

The latest powerful campaign was started this week by hospitality union Hospo Voice, powered by the United Workers Union, and calls for people to put out their aprons to stand in solidarity with the industry.

Hospo Voice have also built from their ‘I Lost My Hospo Shift’ campaign, displaying worker stories written on aprons for their latest campaign, #PutOutYourAprons. The stories highlight people from the industry that have been left behind by the Government’s support packages so far.

One such story comes from Grace Dowling, who worked casually at a Melbourne bar for less than 12 months and is therefore ineligible for JobKeeper. Her apron reads: “Since when did a person have to work somewhere for 12 months before they deserve food on the table?”

“The stories were heartbreaking. I was really moved by the migrant workers speaking out about how they felt abandoned. Many of these workers can’t return to their own countries because the borders are closed, or it’s just too unsafe or because their lives are here now,” Dowling said.

“I feel like it’s everyone’s responsibility to ensure no worker is left behind.”

Other messages are also heartbreaking and powerful, for example:

Although the Government has put in place some measures to attempt to alleviate these problems, for example, a moratorium on evictions for six months, evidence arises every day that things are falling through the cracks. A recent Unions NSW survey recorded that 46 per cent of respondents have been going without meals because they have little or no money in the pandemic.

As reported by Bars and Clubs, support is often coming from the industry itself, with many employers, companies and individuals banding together to help keep people supplied with the basics. This is highlighted in many of the stories from I Lost My Hospo Shift.

United Workers Union says a huge flaw has been uncovered in the Government’s actions, illustrated by the fact that so many people (many of whom held critical roles in the hospitality industry) have nowhere else to turn.

Tim Kennedy, National Secretary of United Workers Union said: “COVID-19 doesn’t discriminate, neither should the Government’s JobKeeper package or any other income support program. It must extend to all workers, no one should be left behind.”

Across a Facebook event, and the social media hashtags #PutYourApronOut and #NoWorkerLeftBehind, people across the country are speaking out in support of hospitality workers and telling their stories.

The campaign encourages everyone of all backgrounds to put out their aprons, to show the Government that no worker should be left behind. 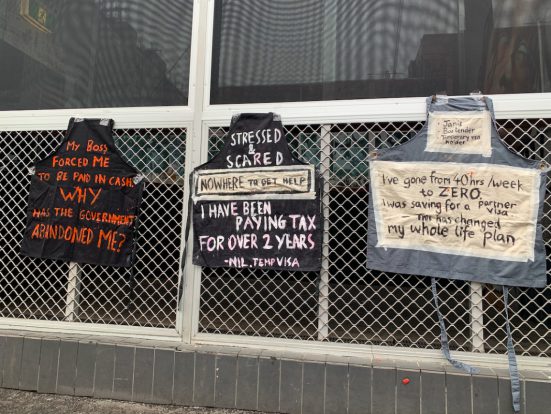