By James Wells, reporting from VinExpo in Hong Kong

Wine Australia has invested over $1 million at VinExpo Hong Kong this week representing the largest ever group of local wineries to assemble for an overseas event.

Wine Australia has unleashed 151 wineries with 225 wine brands across 800 square metres at VinExpo 2018 dwarfing the presence from other nations, as Australia enjoys the ‘Country of Honour’ status at the event.

Following the three-day exhibition which will include 26 separate masterclasses, over 70 Australian wineries, including the First Families of Wine will undertake a four city roadshow of China in conjunction with Wine Australia which again will be the largest event of its kind in Australian history. The roadshow will include networking events, masterclasses and tastings – culminating in a VIP function at the W Hotel on 11 June in Shanghai.

The Greater Chinese market now represents over $1 billion in total value for Australian wine exports after growing by 51 per cent year on year.

Wine Australia chose VinExpo to unveil a new marketing message at VinExpo, ‘Made Our Way’ which is a bold message to differentiate Australian wine from the other export nations. 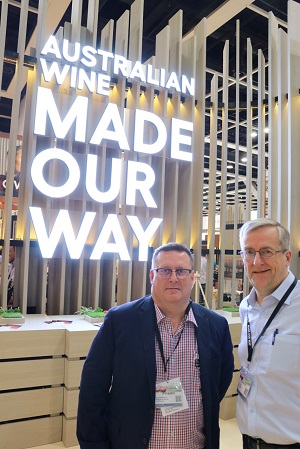 Wine Australia general manger – marketing, Stuart Barclay (pictured left with David Lucas), said the investment has been a joint venture between the wineries themselves and a portion of the $50 million Export and Regional Wine Support Package announced last year.

“This is all about making a statement – Australia is serious and we are here to invest. Asia is very important for us and China is incredibly important for us and being Country of Honour allows us to be bigger and bolder and talk the talk as well as have the biggest stand at the exhibition. ” Barclay told TheShout.

Wine Australia regional manager for Greater China, David Lucas said the combination of the new stand and the new branding message provides a clear message regarding the importance of the Hong Kong and China market.

“Made Our Way is revolutionary and edgy for a wine business but it really gets the message across. Even the smaller 5000 case wineries can apply this message as well as the multi-million case brands – and that is unusual for a campaign like this and it really talks to Australia and what it stands for as a wine industry.”

During the VinExpo Inauguration Ceremony, Australian Federal Senator the Hon. Anne Ruston, Assistant Minister for Agriculture and Water Resources, opened the event together with VIPs and other dignitaries.

“If you an Australian and not proud of being here today – you are not alive,” Senator Ruston told TheShout, before also revealing that she first visited VinExpo as a backpacker in Bordeaux in 1986 pouring wine and washing glasses for the Australian Wine & Brandy Corporation.

“What makes the Australian wine industry so unique is that It is not just about growing the grapes, making the wine, tasting the wine and drinking the wine, we also take it that next step which is wine tourism – so it is the most vertically integrated agriculture industry in the world and we do it so well in Australia. It is a great experience to be here and see the likes of Robert Hill-Smith and Chester Osborn and many others who are the families behind the oldest wine companies in Australia that are still here pressing the flesh and being part of the sales pitch and that’s why this industry is so unique.”

Wine Australia has released this video from the events held on the night before VinExpo Hong Kong representing the launch of the Made Our Way branding: