The rise and rise of XPA

Extra Pale Ale, (XPA) is a style perfectly suited to Australia, sitting somewhere between an American Pale Ale (APA) and India Pale Ale (IPA), it’s a style that has captured the Australian consumer.

Part of what makes XPA such an engaging beer style to the Australian consumer is that it’s a beer being brewed to have all-year round appeal. It’s a style that was pioneered in the US, but is really gaining momentum in Australia.

Because the style sits in between an APA and IPA, it is open to some different interpretations by brewers, but it is a beer that appeals to both craft beer aficionados and those looking for gateway beers.

Described as an American adaptation of English pale ale, XPA is generally lighter in colour than English pale ale and has less caramel flavours. The nose for XPA is usually a moderate to strong hop aroma with citrusy hop characters a very common feature. With the hop-forward nature of XPA the maltiness is less predominant to help support the hop characteristics.

All these elements of the citrusy hop aromas, solid hop flavours without the bitterness of IPA, but still being bigger than an APA put XPA style beers in a hugely appealing space for many Australian consumers. And that is being reflected with XPA styles winning key awards recently including picking up top gongs at the Australian Liquor Industry Awards and the GABS Hottest 100.

Another aspect that makes the XPA so appealing is that many independent brewers are adopting the style and giving it their own something ‘Extra’. A strong and sustainable independent beer market is vital for a strong beer category overall. Australian consumers are increasingly identifying and understanding independent breweries and engaging with the beers they are crafting and releasing.

With independents embracing this style, Australia’s largest independent brewer, Coopers, has released its own XPA to deliver a beer for those people looking to explore new flavours, particularly fruity hop characters. 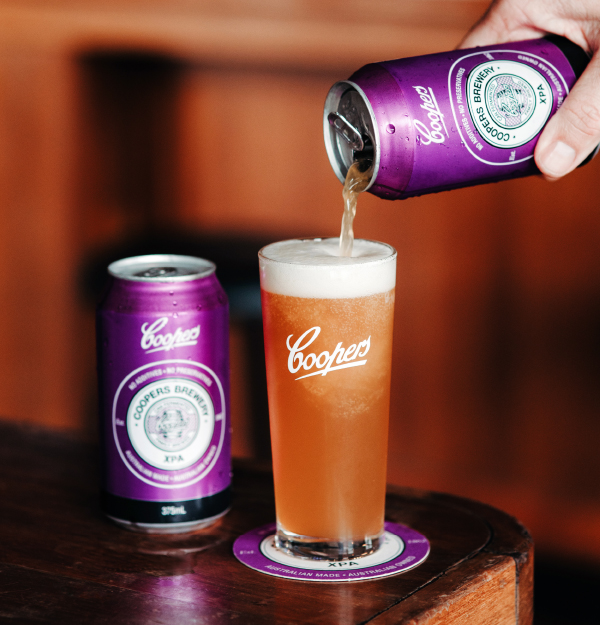 “Our XPA is all about highlighting the citrus character of the American hops and balancing this with our malt to create a smooth and very drinkable hoppy beer.

“With the combination of Simcoe and Lemondrop hops sourced by our brewers, the beer has bright citrus undertones with aromas of grapefruit, lemon and a hint of mandarin. It has an ABV of 5.2 per cent and 37 international bitterness units (IBU).

“Being a Coopers ale, it is naturally conditioned and free of preservatives and additives.”

Pearce also said that Coopers XPA “is targeted at those who want to drink more interesting and crafted beers yet don’t want to over complicate things or feel overwhelmed by the broader complex craft category.”

He added: “XPA is still developing as a category and is enjoying strong growth around the world.

“We believe we have the opportunity to influence how the category progresses in Australia by providing a high quality example of this style of beer with high drinkability.”

The Coopers XPA launched to huge acclaim at the Great Australasian Beer Spectapular, where Pearce said Coopers experienced a record number of sales and had a lot of interest in the beer.

It has since launched in the on-premise and thanks to huge demand through hotels and bars, Coopers is set to release the beer in can format for bottleshops in Australia.

Pearce said: “The decision to release XPA in cans reflects increasing consumer preference for this form of container.

“We are currently considering further expansion to this range.”

And as Australia’s leading independent brewer, Pearce said these are exciting times for brewing and for Coopers right now.

“Having a strong, sustainable independent sector is vital for having a strong industry. Independent brewers not only add great value to the brewing landscape but they also are growing contributors to the overall economy.

“Coopers is independent and family owned and we plan to stay that way. We lead the independent sector in terms of size, but also know that innovation and quality are vital to keep us at the forefront of the brewing scene.”

Coopers XPA is available now in keg format and is scheduled to be available in cans in August. To find out more contact your local Coopers representative.