Independent, family owned Dingle Original Gin has been awarded Overall Best in World at the World Gin Awards Ceremony 2019, which took place in London on the evening of Thursday 21st February.

Earlier in the year, The World Gin Awards 2019 saw over 400 entries from all over the globe blind tasted by industry experts to shortlist the best gins from 20 countries. On Thursday night (21st February), the overall World Best Gin winner was announced as Dingle Original Gin.

“This is an incredibly proud moment for our independent, family owned gin. We launched the distillery in 2012 with the vision to create the best artisan spirits in the world. Winning this award for our Dingle Original Gin proves that we must be doing something right!

It’s also fantastic to be representing Ireland as a world leader in producer of gin, as well as shining a light on our gin’s heritage and hometown of Dingle, County Kerry.” Elliot Hughes, Partner, Dingle Original Gin. 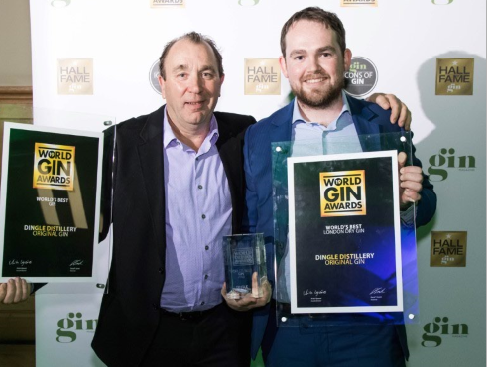 The explosion of the Irish gin market in recent years has seen the launch of more than 50 brands in Ireland and 20 gin producers, with 12 new brands introduced in 2018, according to figures by the Alcohol Beverage Federation of Ireland (AFBI) However, Dingle Gin, which launched in 2012, at a time when it was one of only 2 gins being produced in Ireland, has since won numerous awards and continues to remain a leader in taste.

Dingle Gin is produced in The Dingle Whiskey Distillery, situated on the edge of the scenic coastal town of Dingle on Ireland’s Wild Atlantic Way. Its unique flavour profile is a result of its supply of locally foraged botanicals from its surrounding County Kerry landscape that include rowanberry from the mountain ash trees, fuchsia, bog myrtle, hawthorn and heather. The end result is a London dry gin, with a real sense of place, a fresh citrus dimension, with touches of spicy elements and hints of earthiness reflecting the surroundings from which it was made. The Dingle Whiskey Distillery was conceived by three independent spirits: Liam LaHart, (the late) Oliver Hughes and Peter Mosley who had a vision to bring an artisan craft spirits distillery to the picturesque town of Dingle and pioneer the Irish whiskey renaissance. The independent, family owned distillery distils and releases 100% its own spirits, which include its Dingle Original Gin, Dingle Distillery Vodka and its small batch release Dingle Distillery Whiskey.