In the midst of the COVID-19 pandemic’s forced shutdown of on-premise venues, Australian pubs are proving that there can still be innovation through adversity.

Momento Hospitality show examples of this from both an operator and individual hotel standpoint, starting the Help Out Hospo initiative and opening a drive through one-stop shop at the Bella Vista Hotel in Sydney’s north-west.

Sam Youngs, group executive chef and some of the brains behind both the Food Truck and Essentials Express activations, explained that it’s: “basically a drive through service with food trucks, pretty much contactless for the driver.”

Staff approach cars as they arrive with QR codes that customers scan on their phones to bring up a menu, enabling them to enter their number plate, then order and pay for select dishes from the food truck partners from their phone. Once ordered, a central ticket machine prints dockets for the food trucks to fulfil, and staff run between the machine, trucks and cars to complete the order.

Customers have the choice to order from nine food truck partners on location as well as cocktails and beers from the Bella Vista Hotel itself. Partner vendors cater to a range of staple food truck cuisines, including Momento’s own Fire and Brimstone Barbeque, which helped spark the whole idea in the first place.

“The way it came about was Marcello [Colosimo] our CEO, came to me, because we have a food truck, and said ‘maybe we could lend out the truck to someone, like a chef who’s struggling, and we can help them,” Youngs said.

“I thought that’s generous and a cool idea, then had a think and came back to him and said ‘what if we get 10 food trucks operating?’ They’re all sitting dormant, they’re all owner operated, all struggling at the moment.”

Feedback from customers so far has been great and despite not putting any extra money into advertising, they’re generating a lot of interest. Youngs believes this is because it gives people a chance to go out safely and have a different kind of experience to getting food delivered to your home.

“People are appreciative that they can actually get out of the house and do something that’s still safe. It’s a novelty, it’s something different… while it may be different to a usual food truck festival, you can still experience the food that the food truck operators are passionate about,” Youngs said.

Averaging a spend of $60 to $65 per car and up to 300 cars on Friday and Saturday nights, it’s a very labour-intensive event. However, that just means that there is more opportunity to have Bella Vista staff and food truck staff working, which is beneficial to all the businesses involved. It’s also helped maintain a level of community that pubs are known for, extended into other areas of hospitality.

As Youngs told Australian Hotelier: “Four hotels and over 400 employees, we had to get something going. We’ve managed to get most of our full-timers working, quite a few of our casuals are working now through the Food Truck Express too.”

“I never really had much to do with food truck operators until two weeks ago… I was never socially or professionally in that network. But down there on any night Thursday through Sunday, you can just see it. The guys are chatting, they’re happy, smiles on their faces.”

“We’re not breaking any records as far as what they can produce in their food trucks, but what it’s doing is letting them employ a couple more people back, and it’s helping them pay the bills, so it’s smiles all round at the moment.”

As things go so well at the Bella Vista Hotel, Momento Hospitality meanwhile have begun construction on a new neighbourhood pub at Dural, to be called the Duke of Dural.

Marcello Colosimo, Momento CEO, said: “We are continuing on with the build during these crazy times as we expect to be completed and open by mid-November. Hopefully in line with a full opening of the economy.” 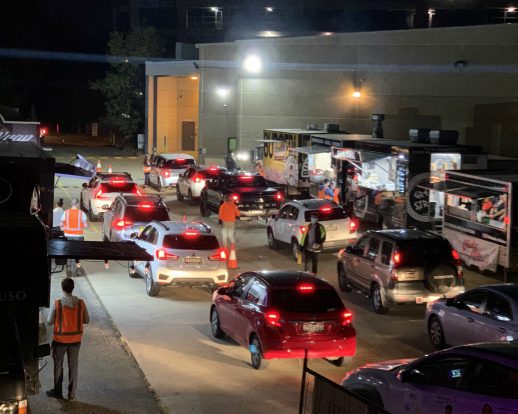 Subscribe to Australian Hotelier newsletter
Related Stories
More than 100 bars join Shaken Not Broken
Connecting with regulars during a pandemic
Let’s band together, work as a team and tackle this head on
Victoria’s on-premise grants welcomed, but industry still “on a knife’s edge”