Hotel sale wrap-up: The pubs that sold over the holiday period

Pub sales did not slow down over the Christmas/New Year break, with transactions taking place in late December and early January.

For the first time in almost 50 years, the freehold of the Emerald Hotel in South Melbourne (pictured above) has been sold. It was sold by the Hart family, who now exit the indsutry, after 48 years of ownership. The sale was negotiated on their behalf by Will Connolly and Nick MacFie of JLL Hotels & Hospitality.

“It truly was a privilege in presenting to market not only an iconic Melbourne pub, but importantly representing a family of such long-term ownership. An ownership span of 48 years requires sensitivity with the heightened level of emotion that can be involved. Our team were better placed than most to recognise this, having just recently transacted another South Melbourne pub, the Wayside Inn, owned by the same family for 27 years,” stated Connolly.

The freehold interest was sold to Gerald Delany, chairman of Kay & Burton real estate agency for just over $6 million. Delany has no plans to change the hotel’s offer.

The Engadine Tavern in south Sydney was sold right at the end of 2020, capping off a year in which similar large-format suburban pubs were aggressively pursued (Bidwill Hotel, Narwee Hotel, The DOG, Gladstone Hotel and more).

The sale of the hotel and commercial property on 5576 sqm was handled by HTL Property’s Dan Dragicevich, Andrew Jolliffe and Sam Handy. The pub includes 26 EGMs, a 60-space carpark, function centre and standalone drive-through bottleshop. The property also includes a DA for a significant residential project.

“There’s simply not many pubs that exhibit the unique upside levers the Engadine Tavern does,” commented Dragicevich.

“A compelling, large-scale all-round trading proposition, in concert with a ready-to-build mixed use development approval; meant a competitive bidding process ensued and was timed to take advantage of the year-end market rush.”

The buyer is a new entrant to the asset class, but experienced in  large-format high quality property development. They are expected to take full advantage of development opportunities within the pub once it settles early in the year.

A brace of regional sales

Both coastal and inland New South Wales have seen pub transactions over the holiday period, with the Plantation Hotel in Coffs Harbour and the Royal Hotel in Tumut being sold.

The Plantation Hotel was divested by Oscars Hotels after three years of ownership  for roughly $10m. The pub was sold  to hotelier Peter Ashelford in partnership with Sydney-based independent advisory firm, Bradfield Advisors, who provide tailored co-investment solutions for real estate acquisitions. Kate MacDonald of JLL Hotels & Hospitality facilitated the transaction on behalf of Oscars Hotels. She noted that the new operator will likely capitalise on new growth within the pub’s catchment.

“The Plantation Hotel has been an iconic coastal venue for decades. Now under new management, the pub is set to benefit significantly from a number of medium- and long-term infrastructure projects, including the Coffs Harbour Bypass and the City Centre Master Plan, as well as unprecedented tourism and population growth.”

In the Riverina region, hotelier Scott Cameron has sold the Royal Hotel in Tumut to a Sydney-based hotel investor.

The large-format hotel occupies a 3,250 sqm lot within Tumut’s town centre and offers a public bar, bistro, gaming room with 13 EGMs and 23 accommodation rooms – eleven of which are freestanding motel rooms with accessible off-street parking.

JLL Hotels & Hospitality’s Kate MacDonald and Ben McDonald facilitated the off-market transaction at a time when Tumut and the greater Riverina region is poised for significant growth.

“Despite the prevailing economic conditions and navigating a global pandemic, our vendors have been incredible to work with, and the consistent nature of the business they built over almost 15 years, was one of the major selling points of the hotel,” stated MacDonald.

Tumut itself is set to experience unprecedented growth over the coming years as the Snowy Hydro 2.0 project builds momentum. The project is expected to create 4,000 new jobs, with Tumut being the nearest major town to the site, as well as the temporary workers camps.

After 15 years operating the pub, Cameron wished the incoming owners every success with the Royal Hotel in the future.

“The professionalism, market understanding and strategic execution of the sale by the JLL team have delivered a result commensurate with our view on the quality of the asset. We have no doubt the purchaser will capitalise on the significant opportunity the Royal Hotel offers going forward and we wish them every success on realising that.” 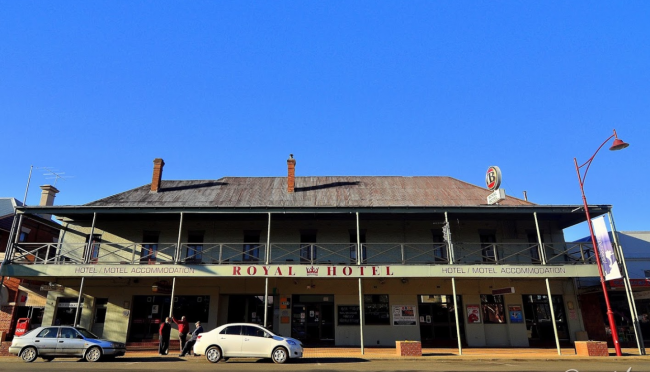 The Royal Hotel Tumut is set to capitalise on the ramp-up of the nearby Snowy Hydro Project 2.0