Excellence in pubs and hotels across Australia was celebrated at the AHA National Awards 2019 at The Star on the Gold Coast on Monday night.

More than 500 guests attended the new-format ceremony, which was set outdoors from late afternoon through to the evening. The event was emceed by television personality, Sophie Formica.

Tasmania was represented in two major awards of the night, starting with THA president Paul Jubb inducted into the National Hall of Fame, and the Shoreline Hotel named Overall Hotel of the Year – Regional. It also picked up Best Bistro – Regional.

Solotel’s Barangaroo House was named Overall Hotel of the Year – Metropolitan, while Feros Group, also based in Sydney, took out the award for Best Hotel Group Operator.

While the evening was one of celebration and frivolity, a moment of silence was held in honour of former national AHA president Peter Burnett, who passed away earlier this year.

AHA NSW and National President Scott Leach said the venues and staff at the awards showcased the best of Australian hospitality.

“Our national awards annually draw together the best venues of the year from right across Australia. Hotels which lead the way in innovation, in inspiration and in design. Together, our finalists show that when you’re at your pub — when you’re at your local — there’s no better place to be in Australia.

“We are here today to celebrate the outstanding individuals who drive our hotel businesses and make them the engine room of the Australian hospitality and tourism industries. I want to congratulate all finalists and winners on a job well done.”

The ceremony ended with an announcement that the 2020 AHA National Awards would be held in Darwin. 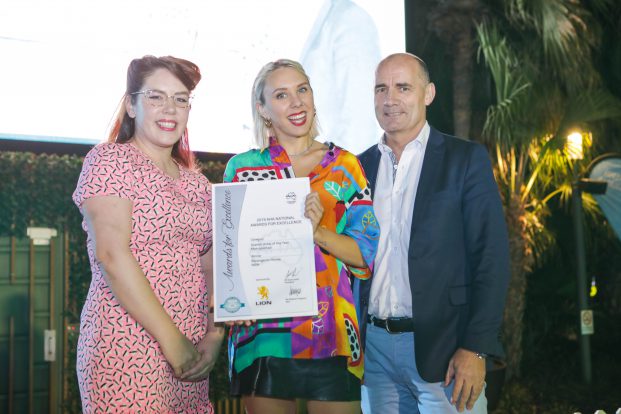 Barangaroo House was named Overall Hotel of the Year – Metropolitan