The rural pub sales for 2020 have kicked off with The Birdsville Hotel in Queensland and the Tambrey Tavern in Western Australia.

Two remote country pub sales have been announced in recent days, on either side of Australia. The sales are of a large-format pub in Western Australia’s north-west, and one of the most iconic and recognisable country pubs in the nation.

The famed Birdsville Hotel in Central West Queensland, has been sold for the first time in 40 years. The hotel has been sold by long-term owners Jo and Kym Fort and David and Nell Brook for roughly $6 million.

The pub was sold through Guy Bennett of Knight Frank to Courtney and Talia Ellis. The couple have extensive careers in country tourism, having founded Outback Spirit Tours and piloted planes for regional and rural services, respectively.

The freehold sale of the 6580 sqm block comprises the pub, as well as its motel offering of 27 guest units, workers’ quarters, two detached residences and industrial land.

The Birdsville Hotel is located roughly equidistant from Brisbane and Adelaide, straddling the Queensland and South Australia border. Due to its surrounding sand dunes, the area is known for two annual events, the Birdsville Races and Big Red Bash outdoor concert. The two events draw large crowds from domestic and international visitors, with the Birdsville Hotel known as the defacto centre of activity.

The new owners are not planning on any major changes at this stage, and will retain the hotel’s current management.

The Tambrey Tavern is Karratha’s largest on-premise venue, and one of the largest in the north-west region of Western Australia. Built over two lots totalling 2.59 ha, the proposition includes the tavern, bistro, function centre and an 850 sqm large-format bottle shop. It has a license for in excess of 1000 people, and currently enjoys a turnover of more than $13m per annum.

It was decided in late 2019 that the proposed liquor restrictions in the north west would not be implemented in Karratha and would be enforced in Port Hedland and South Hedland only, meaning licence conditions would not change at the Tambrey Tavern.

The hotel was sold to a local private operator, with the sale handled by Ryan McGinnity and Chloe Mason of CBRE Hotels. It was sold on behalf of McGrath Nichols, the receivers and managers who had been appointed to the property in April 2017.

McGinnity says that the sale of the pub highlights renewed confidence in the sector, as several offers were fielded during the campaign.

“As the resources sector improves, CBRE expect buyers to focus on North West and the higher returns it offers.”

The Tambrey sale comes on the back of the Karratha Tavern and the Seasons Hotel Newman which both sold in 2019. 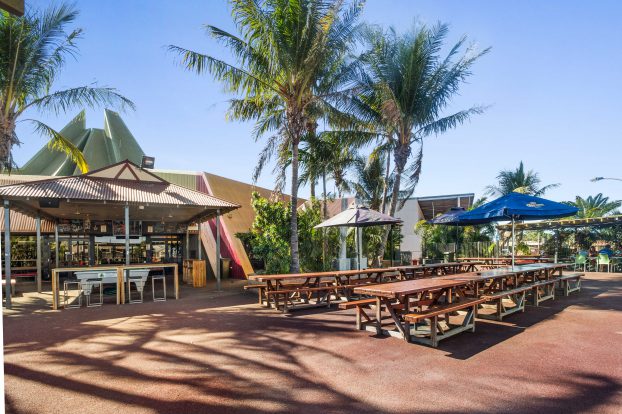 The Tambrey Tavern in Karratha, WA.