Ninety years ago, when Vittorio De Bortoli turned unwanted Shiraz grapes into wine for family and friends, little did he know what he was creating.

He had just purchased a fruit farm near Griffith in the NSW Riverina region, a few years after emigrating from war-torn Northern Italy with dreams of building a better life and was soon joined by his fiancé Giuseppina.

Now, 90 years on, De Bortoli Family Winemakers is in the hands of the third and fourth generation of De Bortoli’s and is operating estates across five Australian winemaking regions in NSW and Victoria. Sustainability is key to their philosophy of leaving a positive legacy for future generations.

Over the past 12 years, De Bortoli has led the industry with its quest to become a zero-waste winery, receiving numerous awards and accolades for their work on wise water management, energy efficiency and improved waste management. With a vision for a future where great wine and a healthy environment can be enjoyed by everyone, they are also embarking on an undertaking to convert 10 to 15 per cent of the Riverina vineyards to organic in five years.

Managing Director and third generation family member, Darren De Bortoli, says that he is proud to be carrying on his grandfather Vittorio’s legacy.

“Our family is incredibly proud to be carrying on the work of our grandfather Vittorio and our father Deen in pushing the boundaries of winemaking to produce premium wines that are enjoyable to everyone and which our business is known for,” he says.

To commemorate the 90 year milestone, De Bortoli has released a special limited edition of Black Noble, the world’s only fortified made from botrytis grapes.

Black Noble was first created Darren De Bortoli in 1998, inspired by a wine his grandfather Vittorio produced in the 1930s.

Black Noble has woven together both the family and the variety’s history, as it is crafted from the same botrytised Semillon grapes harvested for the iconic Noble One, which was developed by Darren and his father Deen in 1982. Today one of the world’s most awarded wines, Noble One has proven that luxuriously sweet and hugely expensive French Sauternes-style dessert wines can be made under Australia’s much harsher climatic conditions.

“From our iconic Noble One, which is now one of the world’s most awarded wines, to igniting Australia’s love of pale, dry rosé with the Rosé Revolution, and producing exciting new wine styles for the modern adventurous wine drinker, we are committed to fulfilling their legacy to ensure De Bortoli Wines remains at the forefront of winemaking innovation,” says Darren.

The limited edition Black Noble is crafted from parcels of wine with an average blended age of 20 years in barrels. A parcel of the most botrytised Semillon grapes at approximately 20 to 22 Baume is selected to produce the Black Noble’s intense and ripe botrytis flavours. De Bortoli has been setting aside portions of these parcels since 1982, with a selection of exceptional quality blended to deliver structure, strength and complexity in this limited edition. A little fermentation occurs before fortification when a grape spirit is added to inhibit further fermentation. The wine is then clarified, and a touch of brandy is added for extra complexity before being transferred into used Noble One barriques. 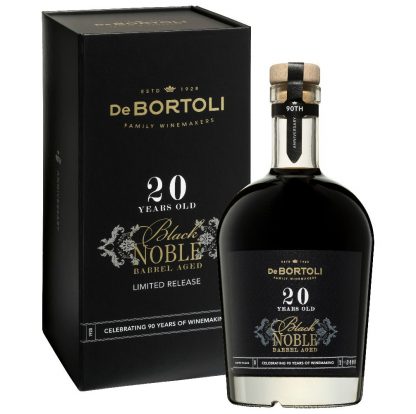