How a sommelier helped create a seltzer brand

As Australia heads into what has widely been dubbed a ‘summer of seltzer,’ there has been an influx of local and international hard seltzer brands hitting the local market.

It’s a developing category on our shores, but seeing the success it has had globally in locations like the US, it’s one with a fair amount of opportunity. As the category finds its feet in this environment, the challenge for producers is to find a point of difference and carve out a spot in the new market.

Securing a point of difference was in mind for the team behind Vacay, as they built their new Australian hard seltzer brand. After seeing the category gap in the market, Co-founder James McPhie knew Vacay needed to consider how to maintain quality and a strong appeal to customers, so he brought on operations expert Amanda Schafer and Sommelier Alex Kirkwood to develop the brand.

With Kirkwood on board, Vacay is now the first seltzer brand to have a sommelier working on its flavour profile. He told National Liquor News about the journey and Vacay’s approach with its products.

“This was all a very coincidental opportunity and one that I really wanted to be a part of. I had been looking at the category for a while in the US and questioning why we don’t have this in Australia, as it fits so perfectly to our lifestyle. I had actually spoken to some friends about looking into creating a brand, when James reached out and asked if I would be interested in discussing a project he wanted to kick start,” Kirkwood said.

“The idea was for me to create something different in the market from what we knew we were about to see. We wanted to have a range of drinks that provided all the benefits of the category but had to be the best flavour available. The idea was to come at the development stage with more of an understanding of a wine background rather than a beer or cider approach.

“So we crafted something that had a smooth, consistent flavour, great length, roundness and texture with no artificial taste or obvious alcohol flavours. We needed it to be moreish and appealing to a broad range of palates and that could be enjoyed all year long. I couldn’t be happier with what we have achieved.”

Vacay’s first products to market include four flavours – Raspberry, Lime, Pure, and Kakadu Plum. The liquid is brewed from a malt base, with artificial colours and preservatives removed, then infused with all natural ingredients and carbonated. The end result, at four per cent ABV and up to 62 calories per 330ml can, is vegan with low carbs, low calories and low gluten. 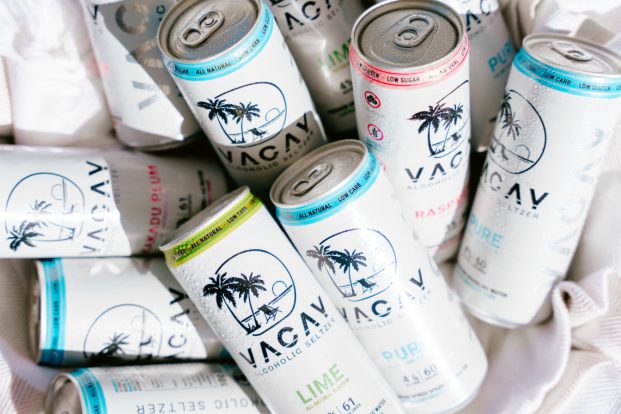 “The range of flavours we have developed were designed for what we saw being the most engaging with the Australian lifestyle. We focused on where we saw our drinks being enjoyed most. Our focus is on an active, wellness lifestyle with a love of the outdoors,” Kirkwood said.

“We saw finger lime and Kakadu Plum as a fantastic showcase of some of the incredible native ingredients that we have in Australia. Raspberry was an obvious choice as a favourite flavour for Aussies and our Pure was designed to be enjoyed on its own but also to have the versatility for mixed drinks. To replace tonic as a mixer, have more flavour and texture than soda and freshen highballs and spritzes all whilst having added health conscious benefits that the current options lack.”

It’s been almost a year long process for the team to launch Vacay, and they knew the category would be ripe to explode around their estimated launch. Since the start, they have also worked on their vision for brand values, strategies and ambassadors (including surfer, DJ and YouTuber Alex Hayes and ex-Australian sprinter Katie Williams).

“There has certainly been some serious competition enter the market but we are incredibly confident with what we have created and stand behind our thoughts that we have a leading product in the market… As we have been working on this for so long, we are now confident we made the right decision about the time spent on developing the brand and not launching until we were completely happy that we had covered all bases,” Kirkwood said.

“As a startup we are extremely excited to grow and educate the category against some big-name international brands as well as some large-scale brewery brands locally.

“It was also very important for us to ensure we could create a brand that was in its foundation able to give back to causes we care about so our Drink for a Cause initiative is set up to support those that are fighting cancer with a donation of 10 per cent of all profits to Cure Cancer.”