To really understand what’s happening in the alcohol retail sector, the essential first step is to look at the changing characteristics of the Australian population. Put simply, we’re going through several historic transitions.

The population has been growing strongly, with the lion’s share of that growth coming from immigration. At first blush, that might sound like good news. More people – the resident population now sits at 25.2 million – should equal higher sales.

But when we look at the kinds of people streaming into the country, they turn out to be much more modest consumers of alcohol than previous generations of Australians.

One in three of Australia’s millennials were born in Asia, and 40 per cent of Gen Z was either born in Asia or has both parents born in Asia where abstinence is more common than in Australia.

Sydney, Brisbane and, most of all, Melbourne have booming populations with domestic migration adding to flows of immigrants to inflate resident numbers. Australians have become far more mobile in recent years – a trend we expect to continue.

Socially, we’re increasingly learning to live in high-rise apartments, are more affluent overall, and the housing boom – such as it was – has made many Australians very wealthy.

All those factors are changing the way we drink, how much we drink, and where we drink.

As younger generations come through they have successively higher levels of education, are more progressive socially, and are oriented towards the ‘experience economy’ – that is, they want to spend more money on entertainment and leisure than discretionary ‘products’ to take home.

In that turbulent context, it’s worth going back to basics to better understand the market.

That’s a large slice of discretionary spending, but it’s a slice coming under pressure from some of the trends mentioned above.

The packaged alcohol market is dominated by supermarkets, which collectively hold 75 per cent market share. Woolworth Group-owned outlets alone command 50.8 per cent of the market in dollar terms.

As the latest Roy Morgan Alcohol Retail Currency Report shows, in the past 12 months Woolworths Group’s Dan Murphy’s stores have leapt ahead, growing market share from 30.5 per cent in September 2017, to 32.4 per cent a year later in terms of dollars spent.

As Chart One shows, that appears to be at the expense of the Coles Group’s Liquorland stores and, apparently, by cannibalising sales at BWS, which is also owned by Woolworths Group. 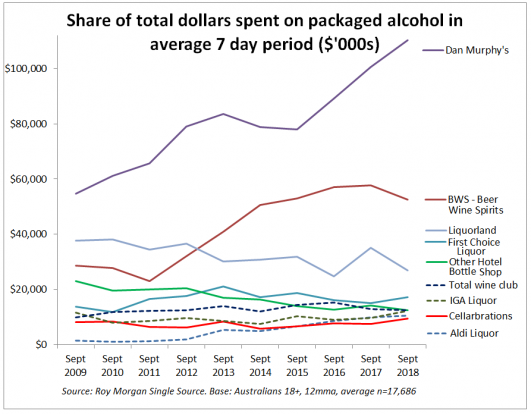 The majority of Australian adults consume some kind of alcoholic beverage in an average four week period, with those that do imbibe averaging 33.8 glasses per four week period in the 12 months to September 2018.

The biggest change in drinking habits over the past 10 years, by a long way, is the decline in consumption of non-premium or non-imported beer. Between September 2009 and September 2018, the number of glasses drunk nationally in an average four week period fell from 215 million to 135 million – a decline of 38 per cent. That change is so stark that we have left it off Chart Two, which shows volumes consumed by drink category, to allow other categories to be analysed more easily.

The number of adult Australians reporting they had drunk white wine in an average four week period fell by just over six per cent over the past two years, from 5.6 million to 5.2 million between September 2016 and 2018. Over the same period, volumes consumed fell by 9.6 per cent.

Red wine has held up a little better. The number of red wine drinkers has been virtually flat for two years, although volumes consumed have fallen 4.6 per cent over the past year after peaking at 58.5 million glasses for an average four week period in the year to September 2017.

The major category growth stories have been in premium or imported beers, and spirits, both of which fit with a longer term trend away from larger quantities of basic products and towards smaller quantities of premium products.

Volumes of premium and imported beers consumed have increased by 36 per cent over the past decade, from 48 million to 65 million glasses, and in the past year alone have increased by 2.9 per cent – one of the few categories to outstrip population growth, which is running at 1.6 per cent.

Spirits have also done well in terms of volumes consumed – much better than their mixed cousins in the ready to drink (RTD) market.

The number of glasses of all spirits combined has grown strongly for the past three years, from 49 million glasses in an average four week period in 2015 to 59 million in the year to September 2018 – a 21 per cent increase overall. 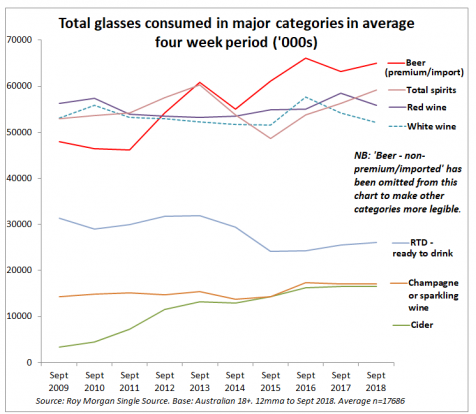 One of the biggest growth stories of the past decade was cider, which some predicted would take substantial market share from beer categories over time.

That trend hit a plateau in 2016 in volume terms – Australians currently drink 17 million glasses in an average four week period – but has declined in terms of numbers of drinkers (see Chart Three).

After that long decade of growth, the number of drinkers in an average four week period fell from 2.5 million to 2.4 million, or 4.2 per cent.

Elsewhere, compelling growth stories are hard to find, though the Canadian Club range of RTDs have shown impressive year-on-year growth – from 398,000 drinkers in the year to September 2017, they are now being consumed by a total of 526,000 in an average four week period. 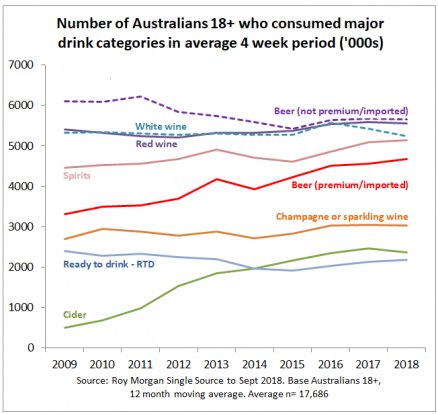 In a tightening market, marketers need every tool at their disposal to track existing customers and attract the best new customers. That’s where precise market segmentation comes in.

For five years Roy Morgan has been introducing a new level of precision marketing to Australia with its Helix Personas platform.

The recently re-calibrated and relaunched Helix Personas tool divides consumers into 54 mindsets or ‘personas’, grouped into six ‘communities’ (see Chart Four) such as the high-spending and cultured ‘Leading lifestyles’ community or the socially aware, successful and career focused ‘Metrotech’ community.

By mapping these personas and communities down to street block level, the platform allows even relatively small retail chains to maximise their marketing spend. 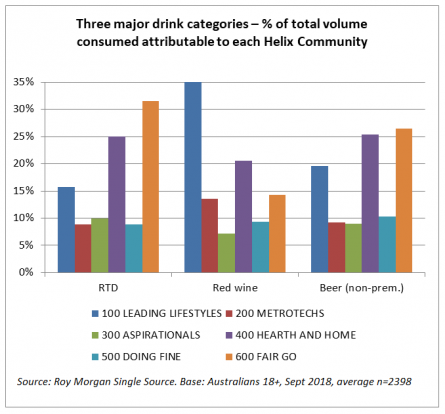 To illustrate the point, Chart Four shows three major drinks categories, with the percentage of total volumes consumed attributable to each of the six Helix Communities.

What the chart cannot show, however, is the granular level of detail that Roy Morgan has on the 54 Personas inside those communities.

Because the Helix Personas platform is built around deep psychographic insights, rather than just simple demographics, two Personas within, say, the Leading Lifestyles community can have very different habits when it comes to drinking wine, RTDs or any other category.

The Helix Personas market segmentation tool can therefore help target specific customers, and where the live, work and shop, mapped down to street blocks of around 60 people. That’s the kind of precision Roy Morgan’s clients are using every day to get more from their marketing dollar.

And in an alcohol retail market that is changing so quickly, and where volumes and price pressures are extremely tight, that’s the kind of competitive advantage that will separate tomorrow’s winners from the struggling pack.

This article was written for the 2019 National Liquor News Annual Industry Leaders Forum published in February.