The owners of Two Heads Brewery in Bathurst have submitted a development application (DA) to open a boutique liquor store in nearby Orange that will focus on supporting independent drinks producers.

Two Heads opened its doors in April 2016 after brothers Campbell and Greg Hedley returned home from stints overseas and decided they wanted to “build something for ourselves combined with a love of good beer”.

Since then, and with the help of Head Brewer Ian Carman, the guys have been producing a range of “approachable” and “tasty” beers that are currently being poured at the brewery as well as at a selection of local pubs. And they are also available through BWS stores in the Central West and independent retailers Bucket Boys and Beer Cartel in Sydney.

Campbell Hedley told National Liquor News that the bottle shop idea was the result of a “lightbulb” moment he had while walking through the Orange Arcade.

“The brewery is in Bathurst, but for family reasons, Greg and I both live in nearby Orange. We both noticed an empty shop right near the exit from Harris Farm in an arcade that had a real boutique feel to it, and the cogs started turning.

“We’ve met so many fantastic producers in the industry since we started, and we decided a shop that was focussed on supporting independent beer, cider, wine and spirit makers really fitted well with what we, and Two Heads, were all about.” 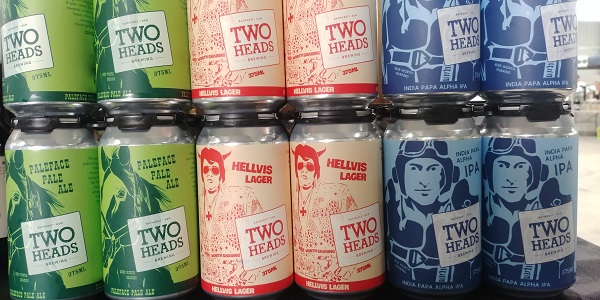 The DA is still with Orange City Council for approval, but so far the community reaction has been positive and if all goes well the brothers hope to have the doors open to what will be called The Lane Cellars in September.

“Orange and the Central West generally has a fantastic food and wine culture, and people are genuinely proud of the product that comes out of the region. When I was delivering the letters notifying nearby businesses of the intention to apply for a license, the mum’s waiting at the dance studio upstairs were particularly excited about the idea of grabbing a bottle of wine to take home after the kids finished dance class,” said Hedley.

“The arcade has become a real fresh food and produce destination and the bottle shop, with a focus on interesting, local, alternative offerings, is a natural fit.

“Finally, we hope to involve lots of the local producers in hosting tastings and other experiences for customers.”

The Lane Cellars is a separate venture to the brewery and will be used as a way to introduce a wider range of fantastic independent products to customers – but you can still expect to see plenty of Two Heads beers on the shelves.